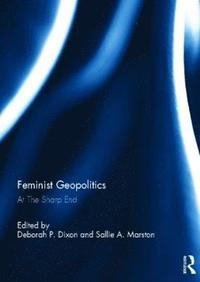 At the Sharp End

av Deborah P Dixon, Sallie A Marston
Inbunden Engelska, 2013-05-22
1669
Köp
Spara som favorit
Skickas inom 10-15 vardagar.
Fri frakt inom Sverige för privatpersoner.
Finns även som
Visa alla 2 format & utgåvor
Building on a trans-disciplinary, feminist project that foregrounds the bodies of those at the 'sharp end' of various forms of international activity, such as immigration, development and warfare, the chapters included in this book cover a variety of sites, concerns, and hopes. These range from the fraught geopolitics of marriage and birth in Ladakh, India, to the fate of detained migrant children in the U.S., and from the human rights abuses of women and children in Uzbekistan to the body politics of aid workers in Afghanistan. The collective aim is to expose the force relations that operate through and upon those bodies, such that particular subjectivities are enhanced, constrained, and put to work, and particular corporealities are violated, exploited, and often abandoned. Oriented around issues of security, population, territory, and nationalism, these chapters expose the proliferating bodies of geopolitics, not simply as the bearers of socially demarcated borders and boundaries, but as vulnerable corporealities, seeking to negotiate and transform the geopolitics they both animate and inhabit. This book was originally published as a special issue of Gender, Place and Culture: A Journal of Feminist Geography.
Visa hela texten

Deborah P. Dixon is a Professor of Geography at the University of Glasgow. She has previously written on feminist geopolitics, and in particular the gendering of Mexican, female, migrant labour and associated notions of vulnerability. She has also emphasised the manner in which feminist geography has been, and continues to be, an arena of critical thought and practice that poses various conceptual and methodological challenges for the geographic discipline as a whole. Most recently, Deborah has written on the notion of the feminine-monstrous, and specifically the transformative potential of the male grotesque. Sallie A. Marston is a professor in the School of Geography and Development at the University of Arizona. Her research focus includes socio-spatial theory and politico-cultural geography. She has published over 60 articles and book chapters and two award-winning textbooks. In addition to her academic work she is involved in community engagement activities around public education.

1. Introduction: Feminist Engagements with Geopolitics 2. She Says Herself, "I have no future": love, fate and territory in Leh District, India 3. The Geopolitics of Vulnerability: children's legal subjectivity, immigrant family detention and US immigration law and enforcement policy 4. Security and gendered national identity in Uzbekistan 5. Armored peacocks and proxy bodies: gender geopolitics in aid/development spaces of Afghanistan 6. Scouting for Girls? Gender and the Social Movement in Britain 7. Where asylum-seekers wait: feminist counter-topographies of sites between states 8. Transnational ways of seeing: sexual and national belonging in Hedwig and the Angry Inch