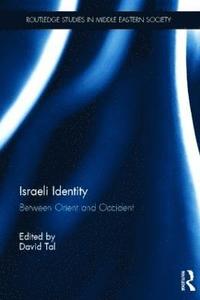 Between Orient and Occident

av David Tal
Inbunden Engelska, 2013-06-28
1729
Köp
Spara som favorit
Skickas inom 10-15 vardagar.
Fri frakt inom Sverige för privatpersoner.
Finns även som
Visa alla 3 format & utgåvor
For many years before and after the establishment of the state of Israel, the belief that Israel is a western state remained unchallenged. This belief was founded on the predominantly western composition of the pre-statehood Jewish community known as the Yishuv. The relatively homogenous membership of Israeli/Jewish society as it then existed was soon altered with the arrival of hundreds of thousands of Jewish immigrants from Middle Eastern countries during the early years of statehood. Seeking to retain the western character of the Jewish state, the Israeli government initiated a massive acculturation project aimed at westernizing the newcomers. More recently, scholars and intellectuals began to question the validity and logic of that campaign. With the emergence of new forms of identity, or identities, two central questions emerged: to what extent can we accept the ways in which people define themselves? And on a more fundamental level, what weight should we give to the ways in which people define themselves? This book suggests ways of tackling these questions and provides varying perspectives on identity, put forward by scholars interested in the changing nature of Israeli identity. Their observations and conclusions are not exclusive, but inclusive, suggesting that there cannot be one single Israeli identity, but several. Tackling the issue of identity, this multidisciplinary approach is an important contribution to existing literature and will be invaluable for scholars and students interested in cultural studies, Israel, and the wider Middle East.
Visa hela texten

David Tal is the Kahanoff Chair in Israel Studies and a Professor in the Department of History at the University of Calgary, Canada. He is an expert in the history of the Middle East as well as nuclear proliferation and disarmament. His previous publications include War in Palestine, 1948: Strategy and Diplomacy (2004), The 1956 War: Collusion and Rivalry in the Middle East (2001), Israel's Conception of Current Security: Origins and Development 1949-1956 (1998), and The American Nuclear Disarmament Dilemma, 1945-1963 (2008). He is currently working on a history of the strategic arms limitation talks and detente.

Introduction - David Tal Part I: In or Of the Middle East 1 How it Began: Europe vs. The Middle East in the Orientation of the First Zionist Settlers - Alan Dowty 2 Israel and the Middle East: on the Unresolved Matter of Israel's Foreign Policy Orientation - Aharon Klieman 3 Unfortunate Misplacement: Israeli-Jewish Public perceptions of Israel in the Middle East - Tamar Hermann & Ephraim Yaar-Yuchtman 4 The Israeli Party System in Comparative Perspective: A "Unique case" or part of the West European tradition?- Csaba Nikolenyi Part II: Contested Identities 5 Where East Meets West - David Ohana 6 The Irresolvable Geographies of Mediterranean- Israeli Music - Amy Horowitz 7 The Architect and Critic Leo Adler and the Definition of Tel Aviv as a Modern Mediterranean City - Yossi (Joseph) Klein 8 Double Exclusion and the Search for Inessential Solidarities: The Experience of Iraqi Jews as Heralding a New Concept of Identity and Belonging - Reuven Snir 9 Remote Participants: Lessons about Israeli Identity from the Experience of Israeli Parents in America- Udi Sommer & Michal Ben Zvi Sommer 10 The Israeli triangle: (de)constructing the borders between Israeliness, Jewishness and migrant workers- Robin A. Harper and Hani Zubida Part III: Cinema and Identity 11 Israeli Cinema's 'I'm in the East and My Heart in the West' - Igal Bursztyn 12 Visions of East and West in Contemporary Israeli Cinema and Television - Paul Kubicek 13 MediterEastern Blues: New Discourses of Locality in Israeli Cinema - Miri Talmon Part IV: Arabs and Jews 14 Israeli-Palestinian Conflict: The Psychosocial and Identity Impact on Arab and Jewish Adolescents in Israel - Alean Al-Krenawi 15 Paradoxes of Identity: Jewish/Muslim Interpenetration in Almog Behar and Sayed Kashua - Ranen Omer-Sherman 16 Democracy and Liberal-Democratic Values in Religious- Zionist Discourse: The Case of Halakhic Q&A Websites - Oren Steinitz