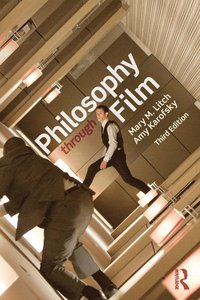 av Mary M Litch, Amy Karofsky
Häftad Engelska, 2014-07-11
729
Köp
Spara som favorit
Skickas inom 10-15 vardagar.
Fri frakt inom Sverige för privatpersoner.
Finns även som
Visa alla 7 format & utgåvor
Many of the classic questions of philosophy have been raised, illuminated, and addressed in celluloid. In this Third Edition of Philosophy through Film, Mary M. Litch teams up with a new co-author, Amy Karofsky, to show readers how to watch films with a sharp eye for their philosophical content. Together, the authors help students become familiar with key topics in all of the major areas in Western philosophy and master the techniques of philosophical argumentation. The perfect size and scope for a first course in philosophy, the book assumes no prior knowledge of philosophy. It is an excellent teaching resource and learning tool, introducing students to key topics and figures in philosophy through thematic chapters, each of which is linked to one or more "focus films" that illustrate a philosophical problem or topic. Revised and expanded, the Third Edition features: A completely revised chapter on "Relativism," now re-titled "Truth" with coverage of the correspondence theory, the pragmatist theory, and the coherence theory. The addition of four new focus films: Inception, Moon, Gone Baby Gone, God on Trial. Revisions to the General Introduction that include a discussion of critical reasoning. Revisions to the primary readings to better meet the needs of instructors and students, including the addition of three new primary readings: excerpts from Bertrand Russell's The Problems of Philosophy, from William James' Pragmatism: A New Way for Some Old Ways of Thinking, and from J. L. Mackie's "Evil and Omnipotence". Updates and expansion to the companion website, including a much expanded list of films relevant to the various subfields of philosophy. Films examined in depth include: Hilary and Jackie The Matrix Inception Memento Moon I, Robot Minority Report Crimes and Misdemeanors Gone Baby Gone Antz Equilibrium The Seventh Seal God on Trial Leaving Las Vegas
Visa hela texten

"This Third Edition of Philosophy Through Film is a valuable book for introducing students to the wonder of philosophical exploration and the power of philosophical reasoning to force us to reevaluate our reflexive responses to fundamental questions, such as the nature of truth or the self. Litch and Karofsky have added more recently released films familiar to undergraduates, such as Inception and Gone Baby Gone, and refocused chapters to better clarify the variety of philosophical positions taken on enduring philosophical questions. What I find valuable about Philosophy Through Film is that it argues that films can make philosophical arguments by drawing us wholly into fictional worlds that enable us to entertain new ideas about truth, reality, or free will in ways that mere argument sometimes cannot." -Jennifer Hansen, St. Lawrence University "With clarity that doesn't compromise rigor, Mary Litch and Amy Karofsky introduce readers new to philosophy to some of its most enduring concerns and seminal questions, including skepticism, personal identity, artificial intelligence, and political philosophy. Coupling penetrating analyses in thematic chapters with excerpts from classical works by Plato, Descartes, Hume, Kant, Mill, Sartre, and others in the philosophical canon, Philosophy through Film connects central philosophical questions to focus films from popular culture that students will recognize and understand. In so doing the book reveals the presence of philosophical issues in the context of everyday life, enabling instructors to capture a wider audience than one might otherwise hope to reach in an introductory philosophy course." -Mark Uffelman, Millersville University "Building upon the strengths of previous editions while expanding its coverage of topics and bringing new films into focus, Philosophy Through Film offers a readable and engaging introduction to a wide range of philosophical questions: about what is real, what we can know, how we should act, and what it all means. Popular films such as Inception and The Matrix provide a rich repository of situations and examples, that not only help to bring these questions to life but offer surprising insights into their solutions. Highly recommended for the introductory philosophy classroom, as well as for anyone who likes movies that make you think." -Nathan Andersen, Collegium of Letters, Saint Petersburg, FL "This book is fabulous! Since its first edition, Philosophy Through Film has served as an outstanding text for both topical introduction to philosophy courses and philosophy and film courses. The writing is very clear, organized, well-researched, and, most importantly, thought provoking. It tackles core philosophical issues in a serious way, yet at the same time remains accessible and exciting to even beginning philosophy students. A unique feature of this book is that it confines itself to a manageable set of films, which can easily be viewed within the timeframe of a single semester. This third edition builds on all the strengths of the previous ones, while including just the right amount of new material to keep it current." -James Fieser, University of Tennessee at Martin