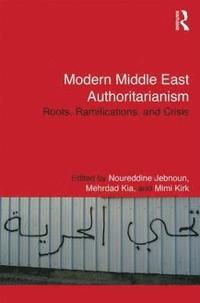 av Noureddine Jebnoun, Mehrdad Kia, Mimi Kirk
Inbunden Engelska, 2013-07-26
1909
Köp
Spara som favorit
Finns även som
Visa alla 3 format & utgåvor
While the Arab uprisings have overturned the idea of Arab "exceptionalism," or the acceptance of authoritarianism, better analysis of authoritarianism's resilience in pre- and post-uprising scenarios is still needed. Modern Middle East Authoritarianism: Roots, Ramifications, and Crisis undertakes this task by addressing not only the mechanisms that allowed Middle Eastern regimes to survive and adapt for decades, but also the obstacles that certain countries face in their current transition to democracy. This volume analyzes the role of ruling elites, Islamists, and others, as well as variables such as bureaucracy, patronage, the strength of security apparatuses, and ideological legitimacy to ascertain regimes' life expectancies and these factors' post-uprisings repercussions. Discussing not only the paradigms through which the region has been analyzed, but also providing in-depth case studies of Tunisia, Egypt, Libya, Algeria, Saudi Arabia, Iraq, and Iran, the authors arrive at critical conclusions about dictatorship and possibilities for its transformation. Employing diverse research methods, including interviews, participant observation, and theoretical discussions of authoritarianism and political transition, this book is essential reading for scholars of Middle East Studies, Islamic Studies and those with an interest in the governance and politics of the Middle East.
Visa hela texten

"The Arab uprisings of 2011 have forced scholars of the region to rethink arguments about the durability of authoritarianism and the prospects for democratic change in the Middle East. This volume is an important contribution to this necessary rethinking. Its chapters offer valuable insight into the complex and evolving political landscape that is taking shape in the Middle East today following the mass protests that forced four Arab autocrats from power, and left their counterparts elsewhere in region uneasy about their own survival." Steven Heydemann, Special Adviser for Middle East Initiatives, United States Institute of Peace "This fine collection, nicely introduced by Noureddine Jebnoun, features timely analyses by seasoned scholars, including several with a wealth of recent field experience in the Middle East. Particularly impressive are sage assessments by Clement M. Henry, Michael C. Hudson and Eric Davis, but case studies by a number of the authors are also of high quality. This is an indispensable volume for understanding the authoritarian political context in which the Arab Awakening began in late 2010. In addition, three noteworthy contributions on Iran expand the substantive canvas. At a time when on-the-fly books on the "Arab Spring" vie for attention, this volume offers more durable scholarship." Professor Augustus Richard Norton, Boston University, USA "Modern Middle East Authoritarianism: Roots, Ramifications, and Crisis is an exceptional addition to the existing body of scholarship on authoritarianism in the Middle East, and in general. It accurately reflects the various dynamics that animate authoritarian governments in the region and offers an astute set of observations about the origins and persistence of this phenomenon. Its relevance and rigor make it a useful tool for students of Middle Eastern politics and history, while its clear assessments of policy render it a necessary resource for policy makers. Many have come close to producing a book of this caliber, but few have patiently labored through analyses of a region swirling in change and delivered a product that may well become a staple of its discipline. The editors and contributors of this volume have done just that." Nathan Lean, writer and scholar on the Middle East As the Arab revolts in Egypt, Syria, and Libya face serious hurdles, and pessimism about the state of affairs in the region (with some optimism about Tunisia) is rising, this new edited volume comes as a welcome addition to the study of authoritarianism. So much has been written on the uprisings in the last three years that one would imagine that authoritarianism, as a system, no longer exists or that it has largely dissolved. Nothing could be further from reality; more studying and probing of these systems is needed, together with a deep analysis of the roots and ramifications of authoritarianism. [...] Indeed, more research has to follow this important and timely book to explore these institutions, the survival of the old networks, the implications of repression of many decades on the population, and last but not least the hard journey of transition from authoritarianism to postauthoritarianism. Joseph Sassoon Center for Contemporary Arab Studies, Georgetown University, Washington, DC, USA

Noureddine Jebnoun is a faculty member at Georgetown University's Center for Contemporary Arab Studies where his teaching interests focus on governance and security challenges of the Arab Middle East and North Africa. He is the author of L'espace mediterraneen: les enjeux de la cooperation et de la securite entre les rives nord et sud a l'aube du XXIeme siecle (2003), as well as many book chapters and articles. Mehrdad Kia is Director of the Central and Southwest Asian Studies Center and a professor of Middle Eastern and North African history at the University of Montana. Kia has published extensively on the intellectual and cultural history of nineteenth century Iran, as well as the history of the Ottoman Empire. His most recent books are The Ottoman Empire (2008), and Daily Life in the Ottoman Empire (2011) both published by Greenwood. Mimi Kirk is Research Director at the Middle East Institute in Washington, D.C. Her other co-edited volumes include Palestine and the Palestinians in the Twenty-first Century (forthcoming, 2013); Uncovering Iraq: Trajectories of Disintegration and Transformation (2011); and Industrialization in the Gulf: A Socioeconomic Revolution (2009). Her writing has appeared in Middle East Report, Jadaliyya, and the Atlantic.