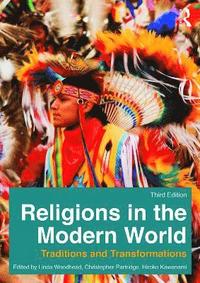 Religions in the Modern World

av Linda Woodhead Mbe, Christopher Partridge, Hiroko Kawanami
Häftad Engelska, 2016-01-25
542
Köp
Spara som favorit
Skickas inom 5-8 vardagar.
Gratis frakt inom Sverige över 159 kr för privatpersoner.
Finns även som
Visa alla 1 format & utgåvor
Religions in the Modern World: Traditions and Transformations, Third Edition is the ideal textbook for those coming to the study of religion for the first time, as well as for those who wish to keep up-to-date with the latest perspectives in the field. This third edition contains new and upgraded pedagogic features, including chapter summaries, key terms and definitions, and questions for reflection and discussion. The first part of the book considers the history and modern practices of the main religious traditions of the world, while the second analyzes trends from secularization to the rise of new spiritualities. Comprehensive and fully international in coverage, it is accessibly written by practicing and specialist teachers.
Visa hela texten

"We often throw a word like 'modern' around, as if we know what it means, or as if there were only one way of getting to or being modern. The present collection of essays on the religions and modernity (and on the modern study of religion) is a powerful reminder that we usually do not know what we are talking about, and that there are multiple religious modernities, each with their own specific political, colonial, economic, psychological, moral, and secular nuances. The volume is a model of comparative theorizing done precisely and deeply." Jeffrey J. Kripal, Rice University, USA