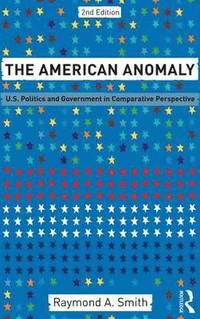 av Raymond A Smith
Inbunden Engelska, 2010-11-12
1679
Köp
Spara som favorit
Skickas inom 5-8 vardagar.
Fri frakt inom Sverige för privatpersoner.
Finns även som
Visa alla 5 format & utgåvor
Seymour Martin Lipset pronounced over a decade ago, "Those who know only one country know no country." It is well established that students learn the intricacies of American politics better when they are presented in a comparative context. In today's globalized society and workforce, it is all the more important for students to understand that the American political system is in many ways the exception and not the rule. Introductory textbooks on American government, however, rarely emphasize in sufficient depth how the United States compares to other political systems. And introductions to comparative politics infrequently situate the United States in their analysis. The American Anomaly systematically analyzes the U.S. political system by way of comparison with other countries, especially other industrialized democracies. It is organized into four sections, respectively covering the constitutional order, governmental institutions, political participation, and public policy. Extended case studies in each chapter draw on all the major regions of the world. Thoroughly revised throughout, the second edition also includes: a new chapter on domestic public policy, including civil rights and liberties; a new chapter on foreign policy; updates throughout to reflect the 2008 elections and the beginning of the Obama administration; a reorganized section on political participation; over a dozen new figures and tables. A companion website also offers overview slides, links, and other supporting features.
Visa hela texten

"Comparison is at the heart of political science, yet many American politics courses are taught as if the world ended at the U.S. border. For instructors who want to break out of this parochialism, The American Anomaly is a godsend. Clear and concise yet wide-ranging, The American Anomaly fits neatly into an introductory course, providing a perspective that will add depth to every facet of the class." -Thomas F. Burke, Wellesley College "The American Anomaly is a rare introductory text that enables students to explore domestic governmental institutions and political processes from a global perspective. The book is conceptually rich, meticulously documented, and well-written and offers an indispensable framework for a core U.S. politics or government course." -Corey Cook, University of San Francisco "Smith adroitly situates the American political system in comparative perspective, offering a refreshing take on U.S. government and politics that invites readers to reflect critically on the extent of American exceptionalism and the United States' international status. Its well-selected case studies, engaging discussions of alternative institutional arrangements, and evenhanded considerations of the pros and cons of the United States' political practices make The American Anomaly an ideal supplement for American politics courses." -Shamira M. Gelbman, Illinois State University

Raymond A. Smith is Adjunct Assistant Professor of Political Science at Columbia University and New York University and is the author of Importing Democracy: Ideas from around the World to Reform and Revitalize U.S. Politics and Government.