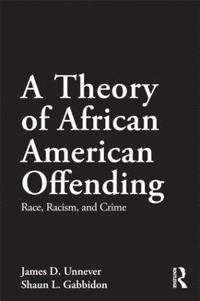 A Theory of African American Offending

av James D Unnever, Shaun L Gabbidon
Häftad Engelska, 2011-03-28
569
Köp
Spara som favorit
Skickas inom 10-15 vardagar.
Fri frakt inom Sverige för privatpersoner.
Finns även som
Visa alla 3 format & utgåvor
A little more than a century ago, the famous social scientist W.E.B. Du Bois asserted that a true understanding of African American offending must be grounded in the "real conditions" of what it means to be black living in a racial stratified society. Today and according to official statistics, African American men - about six percent of the population of the United States - account for nearly sixty percent of the robbery arrests in the United States. To the authors of this book, this and many other glaring racial disparities in offending centered on African Americans is clearly related to their unique history and to their past and present racial subordination. Inexplicably, however, no criminological theory exists that fully articulates the nuances of the African American experience and how they relate to their offending. In readable fashion for undergraduate students, the general public, and criminologists alike, this book for the first time presents the foundations for the development of an African American theory of offending.
Visa hela texten

"Race, Racism, and Crime offers an insightful account of why black Americans more often commit violent crimes than do members of other groups, and why most black people do not. It draws heavily on the American black experience and will become the standard work on the subject." - Michael Tonry, Law, University of Minnesota "This book is a must-read for criminologists and sociologists. Although the book is written for social scientists concerned with explaining crime, it is likely to be of interest to anyone striving to understand the high amount of crime that exists in many African American communities. I look forward to using it as one of the texts in the criminology course that I teach." - Ronald Simons, Sociology, University of Georgia

James D. Unnever is a Professor of Criminology at the University of South Florida-Sarasota-Manatee. Dr. Unnever was the Recipient of the Donal A.J. MacNamara Award by the Academy of Criminal Justice Sciences in 2009. The author of over 40 publications appearing in such journals as Social Forces, Criminology, Social Problems, Journal of Research in Crime and Delinquency, and Justice Quarterly, Dr. Unnever was ranked as the fifth most innovative author in criminology from 2000-2010. His areas of expertise include race and crime, public opinion about crime-related issues including the death penalty, the testing of theories of crime, and school bullying. Shaun L. Gabbidon is Distinguished Professor of Criminal Justice in the School of Public Affairs at Penn State Harrisburg. Dr. Gabbidon has served as a fellow at Harvard University's W.E.B. Du Bois Institute for Afro-American Research, and as an adjunct faculty member in the Center for Africana Studies at the University of Pennsylvania. The author of more than 100 scholarly publications including 50 peer-reviewed articles and 10 books, his most recent books include Race, Ethnicity, Crime and Justice: An International Dilemma and Criminological Perspectives on Race and Crime (2nd edition). Dr. Gabbidon currently serves as the editor of the new SAGE journal, Race and Justice: An International Journal. The recipient of numerous awards, Dr. Gabbidon was most recently awarded the 2009 W.E.B. Du Bois Award from the Western Society of Criminology for his outstanding contributions in the area of race, ethnicity, and justice.