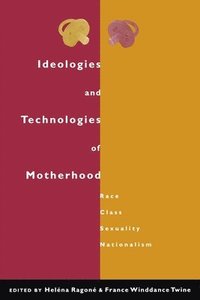 Ideologies and Technologies of Motherhood

"Ideologies and Technologies of Motherhood is nothing less than the most incisive anthology available on the subject of maternity and inequality: it is a powerful and timely contribution to anthropology, feminism, and critical race studies." -- Sarah Franklin, Lancaster University "The strength of this powerful collection lies in more than the vivid detail of the cases, written with freshness and immediacy as they are, and in more than the illumination it brings to theoretical discussions of parenthood and kinship. It also lies in the circumstances which the individual pieces embrace. These bring home, forcefully and concretely, the precariousness of social identity, even when that identity is the 'certainty' of motherhood. The result is a courageous book--or rather its subjects are very often courageous. I found it a humane and inspiring enterprise." -- Marilyn Strathern, author of After Nature and co-author of Technologies ofProcreation "These essays explode the myth of the 'good mother,' the sacrificial, devoted, and fulfilled mother who is implicitly white and middle class. By examining the lives of white mothers of black children, homeless mothers, lesbian co-parents, mothers who adopt, and women who are infertile, have miscarried, or have borne children with disabilities, we can glimpse the ways in which real mothers cope with their everyday situations and with cultural definitions of motherhood that often stigmatize them. But we also see how women in the U.S., Britain, Egypt, and Nicaragua validate new constructions of one of women's most central identities." -- Louise Lamphere, University of New Mexico "This book is an exciting and useful contribution to the racial politics of reproduction and mothering. Combining ethnography and feminist theory, the essays break entirely new ground and introduce us to mothers we rarely learn about." -- Dorothy Roberts, author of Killing theBlack Body: Race, Reproduction, and the Meaning ofLiberty