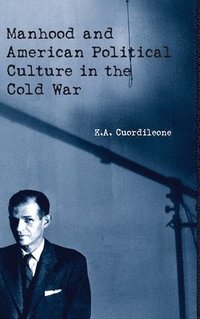 Manhood and American Political Culture in the Cold War

Masculinity, the Vital Center and American Political Culture in the Cold War, 1949-1963

"How conspicuous masculinity came to define a successful Democratic candidacy is, in effect, the topic of Manhood and American Political Culture in the Cold War, a solid and judicious historical analysis of public discourse, from the end of the 1940's until the Vietnam War...Cuordileone has made an invaluable contribution to the political and cultural history of the postwar era." --Stephen J Whitfield, Brandeis University "K.A. Cuordileone has written a remarkably timely book exploring how anxieties about gender lay at the core of Cold War thinking. The book is a wonderfully researched, highly engaging investigation of the many ways discourse about masculinity shaped early Cold War ideology." -- Robert Griswold, author of Fatherhood in America: A History "In this nuanced but powerful book, Cuordileone explores how concerns about gender, sexuality, and especially manhood transformed the language of American politics, in the process, recasting American liberalism into a pragmatic, fighting faith. Focusing on the years from the onset of the Cold War in the late 1940s, Cuordileone skillfully links politics, cultural history, and social change as she highlights the tensions that still define and plague America's political culture." -- Daniel Horowitz, author of Betty Friedan and the Making of "The Feminine Mystique" "This book examines the fascinating confluence of fears of communism and of sexual disorder in the early cold war. Its provocative analysis of political rhetoric, popular books, and feature films is a major contribution to the scholarship on cold war political culture." -- Kathryn S. Olmsted, author of Red Spy Queen: A Biography of Elizabeth Bentley "...it makes an original and important contribution to the history of Cold War America..." --Robert Dean, Eastern Washington University, The Journal of American History

1. Introduction: Gender, Rhetoric and Academic Politics 2. Post-war Liberalism and "The Crisis of American Masculinity": The Seminal Work of Arthur Schlesinger, Jr. 3. "Pinks, Pansies and Punks": The Anti-Communism, Conservative Rhetoric and Feminisation of American Liberals 4. The Hard and the Soft: Conformity, Collectivism and the Beleaguered Male Self of the 1950s 5. New Frontiers: Reinventing the Liberal as Superman Conclusion