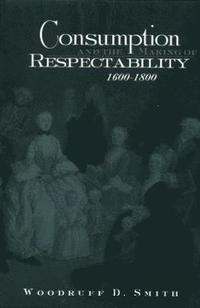 Consumption and the Making of Respectability, 1600-1800

"Woodruff Smith's book is the first systematic historical study of the consumer revolution that took place in the Occident between 1600 and 1800. Here Smith casts must needed light on why and how the new commodities were socially assimilated in European societies, and tries to explain the pattern of consumer revolution from a wide historical perspective. He takes into account not only the consumption itself but also the social context in which the transformation took place during a critical phase of world history. The book will be valuable to all students of modern cultural history." -K.N. Chaudhurt, European University, Florence "That large sections of the world were conquered to obtain marginal amounts of luxury products seems improbable. Yet, that is what happened and historians have failed to provide us with an explanation for this seemingly irrational behavior. Smith has filled this void by his careful analysis of the social importance of certain exotic consumer items showing that the pursuit of "gentility," "rational masculinity," "domestic femininity," and "respectability" created an extremely powerful demand. For too long we have believed in the overriding weight of economics while neglecting the importance of culture behind it. Smith has put the balance right again." -Pieter C. Emmer, University of Leiden, The Netherlands "Woodruff D. Smith's book draws on many fine recent monographs to analyze Western European consumption of the early modern period's archetypal new goods: cotton and pepper, sugar and coffee, tea and tobacco. This book begins with an excellent question: a question originally posed...by a student at the end of class. Teaching about imperialsim, Smith had just finished his lecture on the enormous eighteenth century expansion in European imports of colonial good produced by slaves. "But why did people in Europe want all that sugar?" asked a student (p.2). The book's strength lies in its willingness to address this question, in its effort to bring human motivation into the history of economic and social transformation.." -Rebecca L. Spange, University College London strength lies in its willingness to addre "This work represents a considerable contribution to the field of debate and should be consulted by anyone who plans to write on consumption in early modern Europe....There is much originality in the extended discussions of economic, social, or cultural behavior, and much merit in the author's insistence that the concepts behind consumer demand have to be properly exmained before they can be bandied about as explanations.." -Journal of Modern History, June 2004

Bloggat om Consumption and the Making of Respectabil...

Woodruff Smith is Professor in the department of History at the University of Massachusetts, Boston. He is the author of Politics and the Sciences of Culture in Germany, 1840-1920, The Ideological Origins of Nazi Imperialism, and European Imperialism in the Nineteenth and Twentieth Centuries.