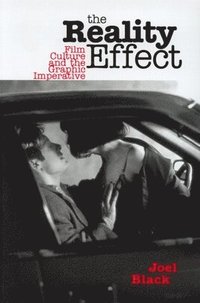 Film Culture and the Graphic Imperative

av Joel Black
Häftad Engelska, 2001-11-01
359
Bevaka
Spara som favorit
Bokens leverantör håller tillfälligt stängt på grund av Coronapandemin. Klicka "Bevaka" för att få ett mejl när boken går att beställa igen eller välj ett annat format nedan.
Finns även som
Visa alla 3 format & utgåvor
It used to be only movies were on film; now the whole world is. The most intimate and most banal moments of our lives are constantly recorded for public consumption. In The Reality Effect, Joel Black argues that the desire to make visible every aspect of our lives is an impulse derived from cinema- one that has made life both more graphic and less "real." He approaches film as a documentary medium that has obscured-if not obliterated- the line between reality and fiction. To illustrate this effect, Black traces the uncanny interplay between movies and real-life events through a series of comparative analyses-from Lolita and the murder of JonBenet Ramsey to Wag the Dog and the Clinton scandal to Crash and Princess Diana's violent death.
Visa hela texten

"Drawing on a wide variety of materials and methods, Black offers an erudite and intriguing book, particularly when he examines how cinematic fictions have blended with such real-life events as murder and assasination, death by car crash, pedophilia and presidential scandal...his provocative discussion is recommended for both public and acadmeic libraries collecting in media and cultural studies. Upper-division undergraduates through faculty; general readers.." - "Choice June 2002 "Recommended for film and media collections." -"Library Journal, December 2001 "Appropriately, 'virtuality' does not exist in my Spell Check, though no other concept so haunts contemporary art, media, and life. In his rich, lucid examination of 'the reality effect, ' Joel Black describes the inroads made in our sense of the world by the ambiguities of representation." -Wendy Steiner, author of "Venus in Exile "Joel Black must now stand as one of America's top cultural critics. The Reality Effect moves effortlessly between the highbrow theory of Freud and Lacan and the low, low genres of pornography and snuff films, providing dazzling insights into such promoters of the 'graphic imperative' as Oliver Stone, Brian De Palma, Abe Zapruder and Reality TV along the way." -Steven Jay Schneider, New York University

Joel Black teaches comparative literature and film at the University of Georgia. He is the author of The Aesthetics of Murder: A Study in Romantic Literature and Contemporary Culture (1991).