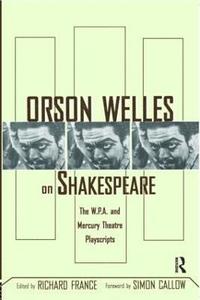 The W.P.A. and Mercury Theatre Playscripts

"Richard France has given us access to genius in making Orson Welles' Shakespeare texts available. Bravo!" -- Stuart Vaughan, Former Artistic Director of the New York Shakespeare Festival "Richard France brilliantly illuminates the work of Orson Welles, providing the reader with a wealth of riches in his inspiring collection. Anyone who loves theatre and film, and who is fascinated by this great American genius, will love this book. France has give un easy access to the Welles' versions of his famous voodoo Macbeth, as well as his fascist Julius Caesar, and finally, of Five Kings, a reworking of Shakespeare's history plays. Wonderfully insightful, presented with eloquence and style, reading this book is like sitting down to a delicious meal. Thank you, Richard France, for this extraordinary piece of theatre history-it is to be cherished." -- Stacy Keach "A singularly important contribution to the growing body of material which holds that we should pay more attention to Shakespeare texts as performed and less to historical issues of textual authenticity. France's own experience as a playwright enables him to treat issues involving Welles and theatre with keener insight than most academic writing on the subject." -- Robert L. Carringer, University of Illinois at Urbana "The reputation of Orson Welles, tarnished by his own excesses, has been glowingly restored by Richard France's brilliant editing of the W.P.A. Mercury Theatre Playscripts. France skillfully reminds us why Welles dominates the history of the 20th Century as one of our greatest stage and film directors." -- Gene Feist, Founding Director of the Roundabout Theatre Company "...a mandatory volume for fans of either Welles or Shakespeare, which should encompass just about every culturally literate person alive." -- Scott Eyman, West Palm Beach Post January 20, 2002

Richard France is a playwright, teacher, actor, and authority on Orson Welles. He is the author of The Theatre of Orson Welles, which was the recipient of the Choice Outstanding Book Award in 1978. He is also the winner of the 1982 Silver PEN award. Currently, France teaches at the City University of New York.