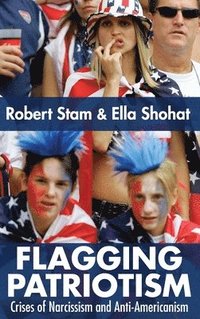 Crises of Narcissism and Anti-Americanism

av Ella Shohat, Robert Stam
Inbunden Engelska, 2006-12-01
1629
Köp
Spara som favorit
Skickas inom 10-15 vardagar.
Fri frakt inom Sverige för privatpersoner.
Finns även som
Visa alla 3 format & utgåvor
The question "Why do they hate us?" is one of the most oft-cited puzzles of contemporary American affairs, yet it's not clear to whom "they" or "us" refers, nor even what "hate" means. In this bold new work, Ella Shohat and Robert Stam take apart the "hate discourse" of right-wing politics, placing it in an international context. How, for example, do other nations love themselves, and how is that love connected to their attitudes toward America? Is love of country "monogamous" or can one love many countries? When can a country's self-love be a symptom of self-hatred? Drawing upon their extensive experience with South American, European, and Middle Eastern societies, the authors have written a long engagement with a problem that refuses to go away. Flagging Patriotism considers these complex features of "being patriotic," and in so doing insists that the idea of patriotism, instead of being rejected or embraced, be accorded the complex identity it possesses.
Visa hela texten

"I find Shohat/Stam's work brilliant, original, exhilarating."-Edward Said "Does patriotic love of one's country have to lead to nationalist narcissism? Or can we imagine a complex, transnational, multi-voiced patriotism? Putting right-wing pseudo-patriots on notice, Stam and Shohat weave past and present voices from Brazil, France, and the United States together into a pathbreaking vision of a vibrant, critical patriotism."-Jodi Dean, author of Zizek's Politics "I am grateful for this book. Now is the time to bracket the daily business of disciplinary work and to attend to a monstrous war in Iraq, and to the Empire that doesn't seem to stop and reflect on the effects of disastrous patriotism. Stam and Shohat combine a shared flair for interdisciplinary analysis and also complementary perspectives on two hemispheres. Their book is a compelling account that calls for re-framing legislation and loyalties."-Doris Sommer, Director of the Cultural Agents Initiative at Harvard University "'They hate us because they hate our freedoms,' George Bush keeps telling us. But if you're becoming a little suspicious that Bush doth protest too much, especially as his own administration has done more than any terrorists to take away 'our freedoms,' this is the book for you. A triangulation in the best sense between French and Brazilian and American exceptionalist skews on the United States, this book bores into the conundra of Anti-Americanism and American patriotism. It holds France and Brazil up as a mirror to the self-conceit of American officialdom. Comprehending anti-Americanism while rejecting it as decisively as it rejects American exceptionalism, Flagging Patriotism points toward a new, transnational patriotism. Easily the most thoughtful book on the subject, it packs accessible analysis alongside gut common sense and is excitingly and exquisitely written."-Neil Smith, author of The Endgame of Globalization

Ella Shohat is Professor in the Departments of Art and Public Policy and Middle Eastern Studies at New York University. She is co-author, with Robert Stam, of Unthinking Eurocentrism, also published by Routledge. Her other books include Talking Visions: Multiculturalism in a Transnational Age, Israeli Cinema: East/West and the Politics of Representation, and Taboo Memories, Dasporic Voices. Robert Stam is University Professor of Cinema Studies at New York University. He is co-author, with Ella Shohat, of Unthinking Eurocentrism, and, with Robert Burgoyne and Sandy Flitterman-Lewis, of New Vocabularies in Film Semiotics, both published by Routledge. His many other books include Film Theory: An Introduction, A Companion to Film Theory, Film and Theory: An Anthology, and Tropical Multiculturalism: A Comparative History of Race in Brazilian Cinema and Culture.

Preface: Love, Hate, and the Nation-State I. On Narcissism and Exceptionalism Patriotism: Myths that Bind and Blind The Angels, and Devils, of History U.S. Exceptionalism: The City on the Hill French Exceptionalism: Grandeur and la Mission Civilisatrice Exceptionalism "Light:" God is Brazilian II. Variations on an Anti-American Theme Sibling Rivalries: Anti-Americanism in France L'Obsession: Anti-Americanism after 9/11 Imaginary Tribes: the "Anglo-Saxons" Brazil and the Collosus to the North The View from the South From Francophilia to Francophobia Anti-French Hysteria and the American Right Anti-Semitism, Misogny, and the NeoCons III. Discrepant Histories of Citizenship New Debates about Old Revolutions In the Name of God and the Republic Foundational Contradictions Citizenship in Brazil Constitutions and their Discontents The Crisis of American Freedom Disjunctive Democracy IV. Political Sense, Cultural Nonsense Return to Exceptionalism: Socialism in America The Protestant Ethic/Ethnic Misreading American Religion Anglo-Saxons: the Sequel Les Mains Salles, or Dirty Hands Submerged Narcissisms Anti-Americanism: Dumb and Smart Imrika Watani: An Arab-American Dirge for 9/11 V. Contemporary Politics and the Crisis of Democracy Pricks and Wimps The Fine Art of Lying Fear, Catharsis and the Daily Show Sodomy, Sadism, and the Christian Right Patriotic Blackmail The Pentagonization of Patriotism The Demise of Reciprocity The Illiberal Media The Wages of Exceptionalism VI. None Dare Call it Patriotism The Contradictions of the Right Wrestling with Patriotism Why The Superpatriots are Not Patriots Patriotic Fictions Patriotism and the Pursuit of Happiness Conclusion Notes Index