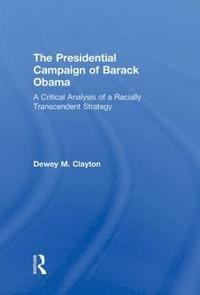 The Presidential Campaign of Barack Obama

A Critical Analysis of a Racially Transcendent Strategy

av Dewey M Clayton
Inbunden Engelska, 2010-03-31
2109
Köp
Spara som favorit
Skickas inom 10-15 vardagar.
Fri frakt inom Sverige för privatpersoner.
Finns även som
Visa alla 4 format & utgåvor
In the early twenty-first century, race still occupies a dominant role in American politics. Despite this truism, presidential candidate Barack Obama was uniquely poised to transcend both race and party as the first African American to have a realistic chance of winning the presidency. Previous contenders running in the traditional mode of the Civil Rights Movement based their appeal primarily on African American voters. Obama, on the other hand, ran a deracialized campaign in an effort to appeal to voters of different backgrounds and political parties. Clayton examines how race in American politics has changed over time and offers an explanation for why Obama's candidacy offers a different roadmap for the future. The Presidential Campaign of Barack Obama provides students of politics, inside and outside of the classroom, a unique opportunity to explore the institutional and structural challenges an African American faces in becoming the president of the United States. This guide to major issues in Black politics and the ins and outs of the 2008 campaign provides the necessary contours for understanding how the highest elected African American official won office.
Visa hela texten

"The Presidential Campaign of Barack Obama is a compelling examination of Barack Obama's successful 2008 campaign and its significance for racial politics and American politics. Professor Clayton's thorough examination of the concept of deracialization makes this book superior to other examinations of the Obama phenomenon. His book is a must read for teachers, students, and researchers with an interest in the role of race in American history and one African American candidate's ability to overcome insurmountable odds. I can't wait to use this book in my classes." -Sharon Wright Austin, University of Florida "Clayton has produced a detailed account of the Obama campaign for the presidency, skillfully weaving into the account the historical background of realigning elections into which he situates the 2008 outcome. He is especially insightful about the role of campaign financing, racial dynamics, technology, and youth in this winning Democratic Party coalition. This account and Clayton's critical assessment of it will be a resource for a long time to specialists and generalists alike." -K. C. Morrison, Mississippi State University "Dewey Clayton's treatment of Barack Obama's ascendance to the presidency is foundational-it is required reading to truly appreciate the saliency of Obama's feat. For the political novice, Clayton provides a clear narrative of the Obama campaign. For the more advanced students of politics, Clayton offers a comprehensive and precise analysis of the campaign which situates the accomplishment historically while providing the scholarly background for appreciating the Obama breakthrough. Clayton makes a major scholarly contribution." -Lawrence J. Hanks, Indiana University

Dewey M. Clayton is Professor in the Department of Political Science at the University of Louisville. He is the author of African Americans and the Politics of Congressional Redistricting and numerous scholarly articles.

Part 1: The Historical Nature of African Americans Running for Political Office, Coalition Politics and Obama's Winning Coalition 1. Introduction 2. Descriptive and Substantive Representation 3. Obama's Winning Coalition Part 2: The Dynamics of the Campaign Process 4. Obama and the Demographic Groups that Supported Him 5. The Clinton Factor: Hillary and Bill 6. The Campaign for the White House 7. Innovations in Technology and Media 8. Change Comes to America