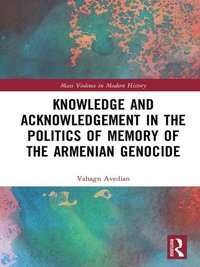 av Vahagn Avedian
E-bok (EPUB - DRM), Engelska, 2018-10-08
669
Ladda ned
Spara som favorit
Laddas ned direkt
Läs i vår app för iPhone, iPad och Android
Finns även som
Visa alla 2 format & utgåvor
Is the Armenian Genocide a strictly historical matter? If that is the case, why is it still a topical issue, capable of causing diplomatic rows and heated debates? The short answer would be that the century old Armenian Genocide is much more than a historical question. It emerged as a political dilemma on the international arena at the San Stefano peace conference in 1878 and has remained as such into our days. The disparity between knowledge and acknowledgement, mainly ascribable to Turkey's official denial of the genocide, has only heightened the politicization of the Armenian question. Thus, the memories of the WWI era refuse to be relegated to the pages of history but are rather perceived as a vivid presence. This is the result of the perpetual process of politics of memory. The politics of memory is an intricate and interdisciplinary negotiation, engaging many different actors in the society who have access to a wide range of resources and measures in order to achieve their goals. By following the Armenian question during the past century up to its Centennial Commemoration in 2015, this study aims to explain why and how the politics of memory of the Armenian Genocide has kept it as a topical issue in our days.
Visa hela texten

Bloggat om Knowledge and Acknowledgement in the Poli...