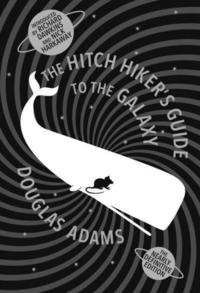 The Hitch Hiker's Guide To The Galaxy

A Trilogy in Five Parts

av Douglas Adams
(3 röster)
Inbunden Engelska, 2014-09-25
353
Köp
Spara som favorit
Kan levereras innan julafton!
__________________________________ THE COMPLETE HITCH HIKER'S GUIDE TO THE GALAXY SERIES Don't panic. First a legendary radio series, then a sequence of bestselling books, a television series, a computer game, a little-known Belgian progressive rock opera, a blockbuster movie, and finally this handsome hardback edition - primarily intended as a blunt object with which to bludgeon one's enemies - The Hitch Hiker's Guide to the Galaxy is one of the greatest fictional enterprises of the twentieth century. Telling the long, circuitous and often inexplicable story of Arthur Dent, left homeless and rather annoyed after the Earth is destroyed in order to build a hyperspace expressway, this edition collects all five parts of the trilogy: * The Hitch Hiker's Guide to the Galaxy * The Restaurant at the End of the Universe * Life, the Universe and Everything * So Long and Thanks For All the Fish * Mostly Harmless along with a wealth of extra material prefaced and contextualised by Jem Roberts, the official biographer of Douglas Adams, to complete the canon. Introduced by Richard Dawkins and Nick Harkaway
Visa hela texten

It is funny and funny in every way * Daily Telegraph * Indispensable reading for mental hitchhikers who want to thumb a lift out of the ruts of orthodox thought * Daily Mail * One of the world's sanest, smartest, kindest, funniest voices * Independent on Sunday *

DOUGLAS ADAMS was born in Cambridge in March 1952 and died unexpectedly in May 2001. He is best known as the creator of The Hitch Hiker's Guide to the Galaxy, which started life as a BBC Radio 4 series. The book went on to be a No. 1 bestseller. He followed this success with The Restaurant at the End of the Universe (1980); Life, The Universe and Everything (1982); So Long, and Thanks for all the Fish (1984); Mostly Harmless (1992) and many more. He has sold over 15 million books in the UK, the US and Australia. Douglas died unexpectedly in May 2001 at the age of 49.