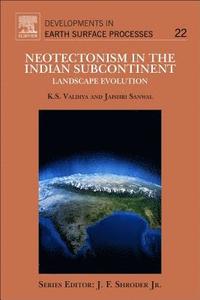 Neotectonism in the Indian Subcontinent

av K S Valdiya
Häftad Engelska, 2017-11-16
1249
Köp
Spara som favorit
Skickas inom 10-15 vardagar.
Gratis frakt inom Sverige över 159 kr för privatpersoner.
Finns även som
Visa alla 1 format & utgåvor
An erudite work on tectonic resurgence in Late Quaternary time of the Indian subcontinent embracing India, Pakistan, Nepal, Bhutan, and Bangladesh, Neotectonism in the Indian Subcontinent dwells on the causes and consequences of tectonic events that fashioned the landscape of a land characterized by a fragmented framework. The narratives on the structural and geomorphic developments during the morphogenic phase of the geodynamic history of the Indian subcontinent explain many phenomena. These include the tremendous height and spectacular structural-geomorphic architecture of the Himalaya, and the behaviour of wayward rivers in the sinking and rising Indo-Gangetic Plains. In addition are the shifting, deflection, piracy, and even disappearance of rivers and streams in the dry desertic terrane of western India, as well as the unique drainage pattern of the ruptured and rifted plateaus and coastal belts of Peninsular India. The formation of huge lakes due to river ponding in the stable continental shield in Karnataka is also explained. All of these phenomena are accompanied by profuse illustrations.

Neotectonism in the Indian Subcontinent portrays the evolution of the extraordinary landforms and landscapes of the subcontinent, constituted by multiple terranes of contrasted lithostructural architecture and distinctive geomorphic layout-each with an altogether different geological history. It chronicles events of crustal unrest or tectonic turmoil manifested as displacement, subsidence, and uplift of the ground with bizarre drainage changes and episodic seismicity. This book caters to planners, engineers, and hazard managers, but also satisfies the curiosity of those who are interested in understanding the formation of the Indian subcontinent.