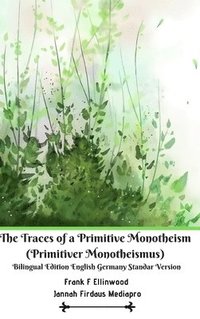 av Jannah Firdaus Mediapro
Inbunden Engelska, 2019-11-20
299
Köp
Spara som favorit
Skickas inom 10-15 vardagar.
Fri frakt inom Sverige för privatpersoner.
There are two conflicting theories now in vogue in regard to the origin of religion. The first is that of Christian theists as taught in the Old and New Testament Scriptures, viz., that the human race in its first ancestry, and again in the few survivors of the Deluge, possessed the knowledge of the true God. It is not necessary to suppose that they had a full and mature conception of Him, or that that conception excluded the idea of other gods. No one would maintain that Adam or Noah comprehended the nature of the Infinite as it has been revealed in the history of God's dealings with men in later times.

But from their simple worship of one God their descendants came gradually to worship various visible objects with which they associated their blessings-the sun as the source of warmth and vitality, the rain as imparting a quickening power to the earth, the spirits of ancestors to whom they looked with a special awe, and finally a great variety of created things instead of the invisible Creator.

The other theory is that man, as we now behold him, has been developed from lower forms of animal life, rising first to the state of a mere human animal, but gradually acquiring intellect, conscience, and finally a soul;--that ethics and religion have been developed from instinct by social contact, especially by ties of family and the tribal relation; that altruism which began with the instinctive care of parents for their offspring, rose to the higher domain of religion and began to recognize the claims of deity; that God, if there be a God, never revealed himself to man by any preternatural means, but that great souls, like Moses, Isaiah, and Plato, by their higher and clearer insight, have gained loftier views of deity than others, and as prophets and teachers have made known their inspirations to their fellow-men.
Visa hela texten

Bloggat om The Traces of a Primitive Monotheism (Pri...