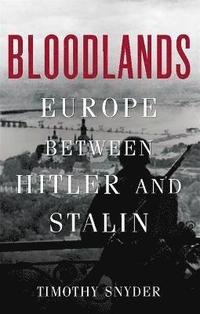 Europe Between Hitler and Stalin

av Timothy Snyder
(1 röst)
Inbunden Engelska, 2010-10-12
379
Köp
Spara som favorit
Skickas inom 3-6 vardagar.
Gratis frakt inom Sverige över 159 kr för privatpersoner.
Finns även som
Visa alla 3 format & utgåvor
Americans call the Second World War The Good War." But before it even began, America's wartime ally Josef Stalin had killed millions of his own citizens,and kept killing them during and after the war. Before Hitler was finally defeated, he had murdered six million Jews and nearly as many other Europeans. At war's end, both the German and the Soviet killing sites fell behind the iron curtain, leaving the history of mass killing in darkness. Bloodlands is a new kind of European history, presenting the mass murders committed by the Nazi and Stalinist regimes as two aspects of a single history, in the time and place where they occurred: between Germany and Russia, when Hitler and Stalin both held power. Assiduously researched, deeply humane, and utterly definitive, Bloodlands will be required reading for anyone seeking to understand the central tragedy of modern history.
Visa hela texten

The Wichita Eagle "Snyder has written a painstakingly researched book which manages to strike a balance between superb scholarship and gut-churning drama. To say that the horrors depicted in this book demand a strongly gifted storyteller is an understatement. By combing archives, depicting the victims as individuals and not numbers or statistics, and by exposing the interior motives of both Hitler and Stalin, Snyder has produced a unique work, something brand-new, riveting and monumental." The Boston Globe "Part of the freshness of Bloodlands is that it flips around our traditional viewpoint on the Second World War and the years that led up to it: Instead of seeing the conflict from the top down, as a struggle between powers, it begins with the perspective of the victims and those who were closest to the murder." Slate"[A] groundbreaking new book about Hitler's and Stalin's near-simultaneous genocides... Certainly one's understanding of both Stalinism and human nature will be woefully incomplete until one does read Snyder's pages." Adam Hochschild, Harper's Magazine "Bloodlands...reassure[s] us that the pursuit of authentic Holocaust consciousness is still flourishing in the scholarly community, with no end in sight." The Polish Review "Many books are useful; a handful can be called important; Bloodlands does no less than change the way we think of 20th century history, and of the deadly human cost of the totalitarian utopianism that was among its most distinctive characteristics... Bloodlands is a wrenching, enlightening, moving, and intellectually challenging examination of the most compelling and painful topic of 20th century history. Few who study it carefully will be able to forget Timothy Snyder's masterly autopsy of the fourteen million times one human being's destroyed in the name of the totalitarian dystopia." Slavic Review "[A]mbitious... Bloodlands seeks to fit the Holocaust into an appropriate historical context by examining the struggle between the Third Reich and the USSR from the perspective of the civilian populations caught in between." "For deliberate mass murder, Hitler and Stalin still stand unsurpassed. Although we have long possessed vast stores of knowledge about their crimes, it may be that we still misunderstand their character and extent-not least because we fail to see how the two great dictatorships interacted. We miss the significance of where, between the mid-1930s and the mid-1940s, the worst horrors took place: Poland, western Russia, and what are now Ukraine, Belarus and the Baltic republics. So argues Timothy Snyder in Bloodlands, which seeks persuasively and movingly to offer a new interpretive framework for the nightmare of Europe's mid-20th century." BBC History Magazine (UK)"A talented historian and an accomplished storyteller, [Snyder] expertly negotiates an extremely complex story, debunking myths, correcting misconceptions and providing context, analysis and human interest in equal measure, always with a sympathetic ear for the victims themselves... Bloodlands is an excellent, authoritative and imaginative book, which tells the grim story of the greatest human demographic tragedy in European history with exemplary clarity. Snyder set out to give a human face to the many millions of victims of totalitarianism. He has succeeded admirably." "For over a decade in the middle of twentieth century, the lands between Russia and Germany were the killing fields of Europe. Tens of millions of civilians from Poland to Ukraine, Lithuania to Belarus were starved, beaten, shot and gassed to death by the authorities and armies of the Soviet Union and Nazi Germany. We think we know this story and we assign it shorthand labels: Auschwitz, the Gulag. But neither the concentration camps (which were mostly not death camps) nor the Soviet network of labor camps in Siberia (from which many survived) were representative of the

Timothy Snyder is Professor of History at Yale University. He is the author of The Reconstruction of Nations, Sketches from a Secret War, and The Red Prince. He lives in New Haven, Connecticut.