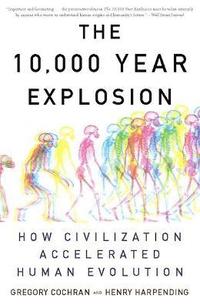 av Gregory Cochran, Henry Harpending
(3 röster)  |  Läs 1 recension
Häftad Engelska, 2010-10-19
353
Köp
Spara som favorit
Kan tyvärr inte levereras innan julafton.
Resistance to malaria. Blue eyes. Lactose tolerance. What do all of these traits have in common? Every one of them has emerged in the last 10,000 years.Scientists have long believed that the great leap forward" that occurred some 40,000 to 50,000 years ago in Europe marked end of significant biological evolution in humans. In this stunningly original account of our evolutionary history, top scholars Gregory Cochran and Henry Harpending reject this conventional wisdom and reveal that the human species has undergone a storm of genetic change much more recently. Human evolution in fact accelerated after civilization arose, they contend, and these ongoing changes have played a pivotal role in human history. They argue that biology explains the expansion of the Indo-Europeans, the European conquest of the Americas, and European Jews' rise to intellectual prominence. In each of these cases, the key was recent genetic change: adult milk tolerance in the early Indo-Europeans that allowed for a new way of life, increased disease resistance among the Europeans settling America, and new versions of neurological genes among European Jews.Ranging across subjects as diverse as human domestication, Neanderthal hybridization, and IQ tests, Cochran and Harpending's analysis demonstrates convincingly that human genetics have changed and can continue to change much more rapidly than scientists have previously believed. A provocative and fascinating new look at human evolution that turns conventional wisdom on its head, The 10,000 Year Explosion reveals the ongoing interplay between culture and biology in the making of the human race.
Visa hela texten

John Derbyshire, author of Prime Obsession "Did human evolution come to a screeching halt fifty thousand years ago when Homo sapiens emerged from Africa, thus ensuring the psychic unity of mankind? Don't be silly, say the authors of this latest addition to the fast-emerging discipline of Biohistory. In clear prose backed by a wealth of hard data, Cochran and Harpending add a biological dimension to the history of our species, and hammer another nail into the coffin lid of 'nothing but culture' anthropology." Bruce G. Charlton, MD; Professor of Theoretical Medicine, University of Buckingham, Editor in Chief of Medical Hypotheses "The 10,000 Year Explosion offers scientists and historians a new and fertile direction for future research, and provides the general public with a better explanation of the past, present, and future of human beings... I was motivated to read the entire book in a single marathon session." John Hawks, author of Human Evolution "For years, human geneticists have been uncovering a picture of human evolution. But now, Gregory Cochran and Henry Harpending are encouraging us to 'fast forward' the discussion." Booklist "A most intriguing deposition, without a trace of ethnic or racial advocacy, though directed against the proposition that 'we're all the same.'" Publishers Weekly "There is much here to recommend...and their arguments are intriguing throughout...it's clear that this lively, informative text is not meant to deceive (abundant references and a glossary also help) but to provoke thought, debate and possibly wonder." Wall Street Journal "Important and fascinating...the provocative ideas in The 10,000 Year Explosion must be taken seriously by anyone who wants to understand human origins and humanity's future." Seed "The 10,000 Year Explosion would be important even if it were only about population genetics and evolutionary biology, but Gregory Cochran and Henry Harpending...have written something more. This book is a manifesto for and an example of a new kind of history, a biological history, and not just of the prehistoric era." New Scientist "The evidence the authors present builds an overwhelming case that natural selection has recently acted strongly on us and may be continuing unabated."

Gregory Cochran is a physicist and Adjunct Professor of Anthropology at the University of Utah. For many years, he worked on lasers and image enhancement in the field of aerospace. He lives in Albuquerque, New Mexico.Henry Harpending holds the Thomas Chair as Distinguished Professor in the Department of Anthropology at the University of Utah. He is a member of the National Academy of Sciences. A field anthropologist and population geneticist, he helped develop the Out of Africa" theory of human origins. He lives in Salt Lake City, Utah.Gregory Cochran and Henry Harpending's research has been featured in the New York Times, The Economist, Los Angeles Times, Jerusalem Post, Atlantic Monthly, Science, Seed, and more.

1. Overview: Conventional Wisdom 2. The Neanderthal Within 3. Agriculture: The Big Change 4. Consequences of Agriculture 5. Gene Flow 6. Expansions 7. Medieval Evolution: How the Ashkenazi Jews Got Their Smarts