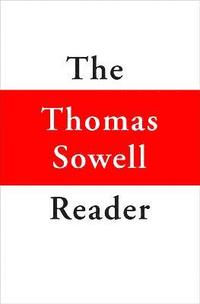 av Thomas Sowell
Inbunden Engelska, 2011-10-04
259
Köp
Spara som favorit
Finns även som
Visa alla 1 format & utgåvor
These selections from the many writings of Thomas Sowell over a period of a half century cover social, economic, cultural, legal, educational, and political issues. The sources range from Dr. Sowell's letters, books, newspaper columns, and articles in both scholarly journals and popular magazines. The topics range from late-talking children to "tax cuts for the rich," baseball, race, war, the role of judges, medical care, and the rhetoric of politicians. These topics are dealt with by sometimes drawing on history, sometimes drawing on economics, and sometimes drawing on a sense of humour.
Visa hela texten

"Thomas Sowell is, in my opinion, the most interesting philosopher at work in America."--Paul Johnson, author of Modern Times "It's a scandal that economist Thomas Sowell has not been awarded the Nobel Prize. No one alive has turned out so many insightful, richly researched books."--Steve Forbes "America's best writer on economics, particularly when that discipline intersects with politics."--World

A one-volume introduction to over three decades of the wide-ranging writings of one of America's most respected and cited authors. The Thomas Sowell Reader includes essays on:Social IssuesEconomicsPolitical IssuesLegal IssuesRace and EthnicityEducational IssuesBiographical SketchesRandom Thoughts &ldquoMy hope is that this large selection of my writings will reduce the likelihood that readers will misunderstand what I have said on many controversial issues over the years. Whether the reader will agree with all my conclusions is another question entirely. But disagreements can be productive, while misunderstandings seldom are." - Thomas Sowell Thomas Sowell has taught economics at Cornell, UCLA, Amherst, and other academic institutions, and his Basic Economics has been translated into six languages. He is currently a scholar in residence at the Hoover Institution, Stanford University. He has published in both academic journals and such popular media as the Wall Street Journal, Forbes, Investors Business Daily, and Fortune, and he writes a syndicated column that appears in newspapers across the country.