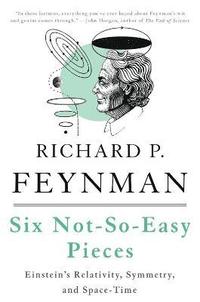 av Richard P Feynman, Robert B Leighton, Matthew Sands
Häftad Engelska, 2011-03-22
159
Köp
Spara som favorit
Skickas inom 7-10 vardagar.
Fri frakt inom Sverige över 159 kr för privatpersoner.
It was Feynman's outrageous and scintillating method of teaching that earned him legendary status among students and professors of physics. From 1961 to 1963, Feynman delivered a series of lectures at the California Institute of Technology that revolutionized the teaching of physics. In Six Not-So-Easy Pieces , taken from these famous lectures, Feynman delves into one of the most revolutionary discoveries in twentieth-century physics: Einstein's theory of relativity. The idea that the flow of time is not constant, that the mass of an object depends on its velocity, and that the speed of light is a constant no matter what the motion of the observer, at first seemed shocking to scientists and laymen alike. But as Feynman shows, these tricky ideas are not merely dry principles of physics, but things of beauty and elegance.No one,not even Einstein himself,explained these difficult, anti-intuitive concepts more clearly, or with more verve and gusto, than Richard Feynman. Filled with wonderful examples and clever illustrations, Six Not-So-Easy Pieces is the ideal introduction to fundamentals of physics by one of the most admired and accessible physicists of all times. There is no better explanation for the scientifically literate layman.", The Washington Post Book World
Visa hela texten

Richard P. Feynman was Richard Chace Tolman Professor of Theoretical Physics at the California Institute of Technology. He was awarded the 1965 Nobel Prize for his work on the development of quantum field theory. He was also one of the most famous and beloved figures of the twentieth century, both in physics and as a public intellectual.