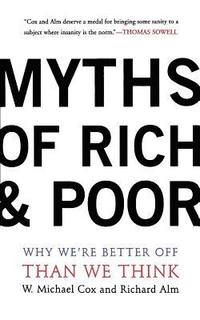 Myths Of Rich And Poor

Why We're Better Off Than We Think

av Michael W Cox, Richard Alm
Häftad Engelska, 2000-01-01
329
Köp
Spara som favorit
Skickas inom 3-6 vardagar.
Fri frakt inom Sverige för privatpersoner.
Finns även som
Visa alla 1 format & utgåvor
Popular wisdom holds that the years since 1973,the end of the postwar miracle",have been a time of economic decline and stagnation: lackluster productivity, falling real wages, and lost competitiveness. The rich have gotten richer, the poor have gotten poorer, and most of us have barely held on while watching all the best jobs disappear overseas.As Myths of Rich and Poor demonstrates, this picture is not just wrong, it's spectacularly wrong. The hard numbers, simple facts, and iconoclastic arguments of this book will change the way you think about the American economy.
Visa hela texten

Myths About Income And Living Standards * Waking Up to Good Times * New and Improved! * Time for Symphonies and Softball * By Our Own Bootstraps * Still on Top of the World Myths About Jobs * The Upside of Downsizing * Somebody Always Flipped Hamburgers * The Economy at Light Speed * The Great American Growth Machine * Epilogue