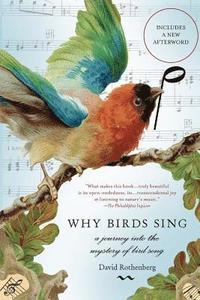 A Journey Into the Mystery of Bird Song

av David Rothenberg
Häftad Engelska, 2006-03-01
329
Köp
Spara som favorit
Skickas inom 10-15 vardagar.
Fri frakt inom Sverige för privatpersoner.
The astonishing richness of birdsong is both an aesthetic and a scientific mystery. Evolutionists have never been able to completely explain why birdsong is so inventive and why many species devote so many hours to singing. The standard explanations of defending territories and attracting mates don't begin to account for the variety and energy that the commonest birds exhibit. Is it possible that birds sing because they like to? This seemingly naive explanation is starting to look more and more like the truth. Why Birds Sing is a lyric exploration of birdsong that blends the latest scientific research with a deep understanding of musical beauty and form. Drawing on conversations with neuroscientists, ecologists, and composers, it is the first book to investigate the elusive question of why birds sing and what their song means to both avian and human ears. Whether playing his clarinet with the whitecrested laughing thrush in Pittsburgh, or jamming in the Australian winter breeding grounds of the Albert's lyrebird, Rothenberg immerses himself in the heart and soul of birdsong. He approaches the subject as a naturalist, philosopher, musician, and investigator. An intimate look at the mostlovely of natural phenomena, Why Birds Sing is a beautifully written exploration of a phenomenon that's at once familiar and profoundly alien.
Visa hela texten

David Rothenberg-philosopher and musician-is the author of Why Birds Sing, which has been published in six languages and turned into a TV documentary by the BBC Sudden Music Hand's End and Always the Mountains. His articles have appeared in Parabola, Orion, The Nation, Wired, Dwell, Kyoto Journal, and Sierra. He is the founding editor of the Terra Nova journal and book series. Rothenberg is also a composer and jazz clarinetist who has released seven CDs, one of which, On the Cliffs of the Heart, was named one of the top ten releases of 1995 by Jazziz Magazine. He lives in Cold Spring, New York.