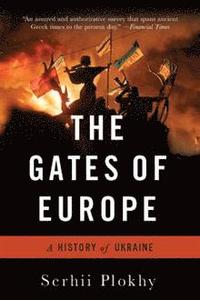 The Gates of Europe

A History of Ukraine

av Serhii Plokhy
Häftad Engelska, 2017-05-30
219
Köp
Spara som favorit
Skickas inom 5-8 vardagar.
Fri frakt inom Sverige för privatpersoner.
Finns även som
Visa alla 4 format & utgåvor
Ukraine is currently embroiled in a tense fight with Russia to preserve its territorial integrity and political independence. But today's conflict is only the latest in a long history of battles over Ukraine's territory and its existence as a sovereign nation. As the award-winning historian Serhii Plokhy argues in The Gates of Europe, we must examine Ukraine's past in order to understand its present and future. Situated between Central Europe, Russia, and the Middle East, Ukraine was shaped by the empires that used it as a strategic gateway between East and West--from the Roman and Ottoman empires to the Third Reich and the Soviet Union. For centuries, Ukraine has been a meeting place of various cultures. The mixing of sedentary and nomadic peoples and Christianity and Islam on the steppe borderland produced the class of ferocious warriors known as the Cossacks, for example, while the encounter between the Catholic and Orthodox churches created a religious tradition that bridges Western and Eastern Christianity. Ukraine has also been a home to millions of Jews, serving as the birthplace of Hassidism--and as one of the killing fields of the Holocaust. Plokhy examines the history of Ukraine's search for its identity through the lives of the major figures in Ukrainian history: Prince Yaroslav the Wise of Kyiv, whose daughter Anna became queen of France; the Cossack ruler Ivan Mazepa, who was immortalized in the poems of Byron and Pushkin; Nikita Khrushchev and his protege-turned-nemesis Leonid Brezhnev, who called Ukraine their home; and the heroes of the Maidan protests of 2013 and 2014, who embody the current struggle over Ukraine's future. As Plokhy explains, today's crisis is a tragic case of history repeating itself, as Ukraine once again finds itself in the center of the battle of global proportions. An authoritative history of this vital country, The Gates of Europe provides a unique insight into the origins of the most dangerous international crisis since the end of the Cold War.
Visa hela texten

Wall Street Journal "[An] exemplary account of Europe's least-known large country... one of the joys of reading the 'The Gates of Europe' is that what might seem a dense account of distant events involving unfamiliar places and people is leavened by aphorism and anecdote." Financial Times "An assured and authoritative survey that spans ancient Greek times to the present day." The Economist "[An] admirable new history... belief in Ukraine's history of tolerance and legality, rooted in European Christian civilisation, keeps hope alive. In his elegant and careful exposition of Ukraine's past, Mr Plokhy has also provided some signposts to the future." Foreign Affairs "No one can understand today's sad, tangled confrontation over Ukraine without some knowledge of the complex, crosscutting influences that have shaped eastern Europe over the millennia. For that history, readers can find no better place to turn than Plokhy's new book... Plokhy navigates the subject with grace and aplomb." Washington Post "A vigorous polemic in the classical sense of that word -- a sharply focused argument in support of a debatable point of view. Washington Times "[A] concise, highly readable history of Ukraine... a lively narrative peopled with a colorful cast of Norse and Mongol marauders, free-booting Cossacks, kings, conquerors and dictators, and conflicted 19th century intellectuals who believed fervently in a Ukrainian cultural identity but were fatally divided as to how that cultural identity could evolve into national entity." New York Review of Books "Elegantly written." Publishers Weekly "Injecting appropriate nuance and complexity into a single-volume overview of 2,000 years of Ukrainian history is no small task, but Plokhy approaches this charge with dexterity and skill... Plokhy's work serves as a welcome introduction to Ukraine's ethnic and national history." Library Journal "The timeframe and subjects covered here are extraordinary...students, academics, and readers with a general knowledge of Ukraine will appreciate. Alternatively, chapters can be read independently, allowing those with a strong interest in the subject to focus on a specific era of Ukraine's history." Independent, UK "A masterly surveyor of Ukrainian history." Winnipeg Free Press, CAN "A comprehensive, unbiased history." Ukrainian Weekly "Buy this book...Give copies to your children and grandchildren. Buy copies for your friends. Make sure they read it." Kirkus Reviews "A sympathetic survey of the history of Ukraine along the East-West divide, from ancient divisions to present turmoil... A straightforward, useful work that looks frankly at Ukraine's ongoing "price of freedom" against the rapacious, destabilizing force of Russia." Norman M. Naimark, Stanford University "For a comprehensive, engaging, and up-to-date history of Ukraine one could do no better than Serhii Plokhy's aptly titled The Gates of Europe. Plokhy's authoritative study will be of great value to scholars, students, policy-makers, and the informed public alike in making sense of the contemporary Ukrainian imbroglio." Michael Ignatieff, Harvard Kennedy School of Government "This is present-minded history at its most urgent. Anyone wanting to understand why Russia and the West confront each other over the future of Ukraine will want to read Serhii Plokhy's reasoned, measured yet passionate account of Ukraine's historic role at the gates of Europe." Peter Pomerantsev, author of Nothing is True and Everything is Possible "Finally: a compelling and concise history of a country leading the news but which too many know embarrassingly little about. There are no more excuses for ignorance." Andrew Wilson, Professor of Ukrainian Studies at University College London "Serhii Plokhy has produced a perfect new history of Ukraine for these troubled ti

Bloggat om The Gates of Europe

Serhii Plokhy is the Mykhailo Hrushevsky Professor of Ukrainian History at Harvard and the director of the university's Ukrainian Research Institute. The author of nine books, including the award-winning The Last Empire, which received the Lionel Gelber Prize, the Pushkin House Russian Book Prize, and the Antonovych Prize, Plokhy lives in Arlington, Massachusetts.