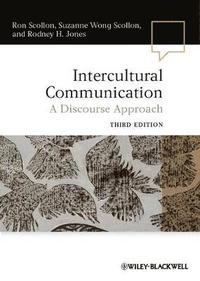 Overall, the paradigm presented throughout the now three iterations of this book remains a remarkably insightful way to conceptualize factors influencing communication, or, in the authors own terms, factors mediating communication. By focusing on common denominators of all human life (ideologies, forms of discourse, socialization, and face systems) Scollon, Scollon, and Jones successfully arrive at a culture-neutral heuristic that can be used in any instance of interpersonal (and thus, intercultural) communication. (Linguist List, 8 January 2013)

Ron Scollon (1939-2009) was a Professor of Linguistics at Georgetown University. His publications include Professional Communication in International Settings, co-authored with Yuling Pan and Suzanne Wong Scollon (Blackwell 2001), Discourses in Place: Language and the Material World co-authored with Suzie Wong Scollon (2003), and Nexus Analysis: Discourse and the Emerging Internet co-authored with Suzie Wong Scollon (2004). Suzanne Wong Scollon is an independent researcher in the North Pacific Rim. She has written extensively on intercultural communication, holding academic positions in North American universities as well as in Taiwan, South Korea, and Hong Kong. She also acted as a consultant, along with Ron Scollon, with over fifty governmental and corporate organizations in North America, Asia, and Europe. Rodney H. Jones is the Associate Head of the Department of English at City University of Hong Kong. He has published widely in international journals and is co-editor of Discourse in Action: Introducing Mediated Discourse Analysis (with S. Norris 2005), Advances in Discourse Studies (with V. K. Bhatia and J. Flowerdew 2007), and author of Noticing, Exploring and Practicing: Functional Grammar in the ESL Classroom (with G. Lock 2010), and Discourse Analysis: A Resource Book for Students (2012).