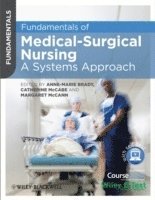 av Anne-Marie Brady, Catherine McCabe, Margaret McCann
Häftad Engelska, 2013-01-04
369
Köp
Spara som favorit
Skickas inom 5-8 vardagar.
Fri frakt inom Sverige för privatpersoner.
Finns även som
Visa alla 2 format & utgåvor
Fundamentals of Medical-Surgical Nursing: a Systems Approach is a comprehensive yet easy-to-read overview of medical and surgical nursing, designed specifically to support all nursing students learning to care for the adult patient. Highly illustrated and with an easy-to-follow systems-based structure, it provides a thorough foundation in anatomy and physiology, pathophysiology, medical management, and nursing care for the full spectrum of adult health conditions. Key features include: * Extensive coverage of principles of nursing assessment, medication administration, infection prevention and control, and nutritional care * Key need-to-know-information and definitions for the anatomy, physiology, and pathology of a range of illnesses and conditions * Detailed overviews of nursing care, including patient education, treatment, and complications * An online resource centre with a range of extras for both lecturers and students, including case studies, reflective activities, interactive multiple choice questions, and further reading lists Fundamentals of Medical-Surgical Nursing: a Systems Approach is the ideal textbook to help students succeed on their adult nursing course. It is also available: * as a Wiley E-Text, powered by VitalSource: an interactive digital version of the book featuring downloadable text and images, highlighting and note-taking facilities, book-marking, cross-referencing, in-text searching, and linking to references and glossary terms. * instantly on CourseSmart at http://www.coursesmart.co.uk/9780470658239. CourseSmart offers extra functionality, as well as an immediate way to review the text. For more details, visit www.coursesmart.com/instructors or www.coursesmart.com/students.
Visa hela texten

This is book is aimed at pre-registration nursing students and other healthcare students but would also be appropriate for training or qualified assistant practitioners. It would also be useful to newly qualified nurses working in medical or surgical areas. (Nursing Times, 1 August 2014)

Anne-Marie Brady has been involved in undergraduate and postgraduate education since 2000 and is currently an Assistant Professor at Trinity College Dublin, Ireland. She completed a Masters in Nursing at Northeastern University Boston, Massachusetts in 1999 and a Postgraduate Diploma in Clinical Health Sciences Education in 2001. Her particular areas of research and teaching interest is general nursing and healthcare management. She has considerable international nursing experience, having worked in the United Kingdom, United States of American and the Irish Republic. Catherine McCabe qualified as a nurse in 1988 and has experience in surgical and emergency nursing. Following completion of a Bachelors Degree in Nursing Studies at University College Dublin in 1996, Catherine has been involved in developing and teaching undergraduate and postgraduate nursing programmes. In January 2001 she was awarded an MSc in Nursing by the University of Manchester and in February 2002 joined Trinity College, School of Nursing and Midwifery as a lecturer. She completed her PhD in 2009 and is currently an Assistant Professor at Trinity College Dublin, Ireland. Margaret McCann is currently an Assistant Professor at Trinity College Dublin, Ireland and was previously employed as a lecturer in the Faculty of Nursing and Midwifery, Royal College of Surgeons in Ireland. Margaret obtained an MSc in Nursing from the University of Manchester and Royal College of Nursing in 2001. She has been involved in nurse education since 1996. Margaret's primary teaching and research interests lie in the area of urology and renal care.