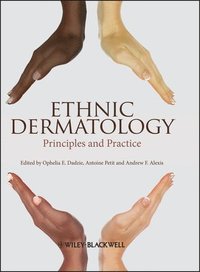 This book joins the library of references on skin of color. It is a good introductory textbook to learn about the special concerns and variation in clinical presentations of dermatoses in darker skinned individuals. (Doody s, 2 August 2013)

Dr. Andrew F. Alexis is the Director of the Skin of Colour Center, and an attending physician at St. Luke's-Roosevelt Hospital Center in New York City. He is also an Assistant Clinical Professor of Dermatology at Columbia University, College of Physicians and Surgeons. Dr. Alexis received his medical degree from Columbia University, College of Physicians and Surgeons, and his Master's of Public Health degree from Columbia University, Mailman School of Public Health. He completed his dermatology residency at Weill Cornell Medical Center, and a fellowship in dermatopharmacology at New York University School of Medicine, all in New York City. Dr. Alexis currently serves as a member of the Board of Directors of the Skin of Colour Society and is an active member of the American Academy of Dermatology Diversity Task Force Committee. He is also Past President of the New York Academy of Medicine Section on Dermatology and Treasurer of the Dermatology Society of Greater New York. Dr. Alexis has appeared on CBS, NBC, and FOX television news programs and has been quoted in numerous publications including Allure, Ebony, The New York Sun, Forbes.com, Upscale, Heart & Soul, Vibe Vixen, Sister 2 Sister, and Happi magazine. Author of numerous dermatology publications and an investigator in many clinical studies, Dr. Alexis' areas of interest includes the management of skin and hair disorders in patients with skin of colour. Dr Ophelia E. Dadzie is a Consultant Dermatologist and Dermatopathologist at St John's Institute of Dermatology, Guy's and St Thomas' NHS Foundation Trust, London, UK. She trained in medicine at St Mary's Hospital Medical School (Imperial College of Science, Technology and Medicine) where she received a first class honours degree in biomedical sciences in 1995. She graduated in 1998 with a MBBS degree. Following this, she worked in various London teaching and district general hospitals in general medicine as a house officer, senior house officer and medical registrar. She obtained Membership of the Royal College of Physicians (MRCP) in 2002. She undertook her dermatology specialist registrar training at the Hammersmith, Ealing and Chelsea and Westminster hospitals and received her CCST in dermatology in June 2009. In 2006 during her dermatology training she was awarded the Geoffrey Dowling award by the British Association of Dermatologists to help fund part of a 22-month training in dermatopathology at Boston University, USA. She now holds the first part of the Diploma in Dermatopathology exams (Royal College of Pathologists). She has written many articles in peer-reviewed journals (case reports, original research and review articles)-her area of expertise being in dermatopathology and ethnic dermatology/skin of colour. She is also the founder and director of Black Health Matters, an organization dedicated to educating ethnic minorities about issues pertaining to their health. She is also the organiser of the first ethnic skin course in the UK (website-www.londonethnicskin.com) and a member of GTPN, a sub-group of the French dermatological society focused on ethnic dermatology. Dr Antoine Petit is a senior physician at the department of Dermatology, Hopital Saint-Louis in Paris, France. Dr. Petit worked as "Interne des Hopitaux de Paris" from 1981 until 1987, including 15 months as a resident in French West Indies. He was appointed as "Chef de Clinique Assistant" in the Dermatology Department of Professor Civatte in the Hopital Saint-Louis in Paris in the 80's. In 1989, he joined the Dermatology Department of Dr. Sigal in Argenteuil (in the northern suburb of Paris), where he was appointed as a full time "Praticien Hospitalier" in 1993. In 2003, he came back to the Hopital Saint-Louis (Professor L. Dubertret, then Professor M. Bagot), where he is currently working. His main areas of interests are "Skin of Colour", Internal Medicine, Scleroderma and Keloids. He is also Copy Ed