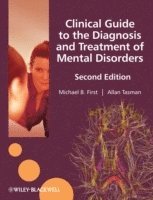 Clinical Guide to the Diagnosis and Treatment of Mental Disorders

av Michael B First, Allan Tasman
Häftad Engelska, 2010-01-15
1189
Köp
Spara som favorit
Skickas inom 10-15 vardagar.
Fri frakt inom Sverige för privatpersoner.
Finns även som
Visa alla 2 format & utgåvor
Two key challenges face mental health practitioners: making the correct psychiatric diagnosis and choosing the most appropriate treatment option. This book aims to help with both. Clinical Guide to the Diagnosis and Treatment of Mental Disorders - Second Edition combines clinically-relevant information about each of theDSM-IV-TR diagnoses with clear, detailed information on treatment options, giving full clinical management advice. Once again, the editors, both leading psychiatrists, have condensed the chapters on Disorders from Tasman et al's acclaimed two volume textbook of Psychiatry (now in its Third Edition), retaining only the content they deem particularly relevant to the clinician for ease of use. Each disorder is discussed under the headings of Diagnosis (including Assessment Issues, Comorbidity, Course, and Differential Diagnosis, giving diagnostic decision trees where relevant) and Treatment (listing all therapeutic options, giving practical advice for patient management, summarising treatment specifics with tables and treatment flowcharts). The original edition established itself as the first point of reference for any clinician or mental health practitioner needing expert advice on therapeutic options for any psychiatric disorder. This edition features an additional chapter on the psychiatric interview and assessment of mental status to increase its utility. It echoes the progress in psychiatry regarding the establishment of an evidenced-based model of taxonomy, diagnosis, etiology, and treatment. Indeed, from a psychologist's perspective, the equal consideration provided to empirically supported psychosocial treatments versus somatic treatment is a significant development in the field of psychiatry. Jonathan Weinand in PsycCritiques, the American Psychological Association Review of Books
Visa hela texten

"In my opinion, this book would be worth borrowing from the library in order to read specific chapters of interest; perhaps, the common mental health conditions or a rarity recently encountered in clinic." (Occupational Medicine, 5 December 2010) "The main addition to this edition is a useful introductory chapter on the psychiatric interview, with comments on "compiling the psychiatric database" (which seems to be what used to be called the patient's notes). I was also glad to see rather more mentions of evidence-supported psychological therapies in among the recommended drug treatments than in the previous edition." (Journal of Mental Health, August 2010)

Bloggat om Clinical Guide to the Diagnosis and Treat...

Michael B First Professor of Clinical Psychiatry at Columbia University and the Psychiatric Institute of New York. He is an expert on the DSM-IV-TR classification and is playing a key role in the development of DSM-V. Allan Tasman Professor and Chairman of the Department of Psychiatry and Behavioral Sciences at the University of Louisville School of Medicine, Kentucky, USA. Professor Tasman is Past President of the American Psychiatric Association and President of the Pacific Rim College of Psychiatrists. He is a world-renowned psychiatric leader and educator and is Secretary for Education of the World Psychiatric Association, responsible for all of the association's worldwide education programmes and initiatives.