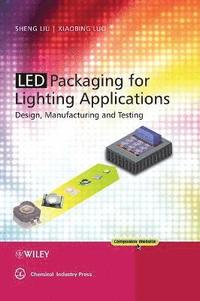 av Sheng Liu, Xiaobing Luo
Inbunden Engelska, 2011-06-14
1079
Köp
Spara som favorit
Skickas inom 7-10 vardagar.
Fri frakt inom Sverige för privatpersoner.
Finns även som
Visa alla 2 format & utgåvor
Since the first light-emitting diode (LED) was invented by Holonyak and Bevacqua in 1962, LEDs have made remarkable progress in the past few decades with the rapid development of epitaxy growth, chip design and manufacture, packaging structure, processes, and packaging materials. LEDs have superior characteristics such as high efficiency, small size, long life, low power consumption, and high reliability. The market for white LED is growing rapidly in various applications. It has been widely accepted that white LEDs will be the fourth illumination source to substitute the incandescent, fluorescent, and high-pressure sodium lamps. With the development of LED chip and packaging technologies, the efficiency of high power white LED will broaden the application markets of LEDs while changing the lighting concepts of our lives. In LED Packaging for Lighting Applications, Professors Liu and Luo cover the full spectrum of design, manufacturing, and testing. Many concepts are proposed for the first time, and readers will benefit from the concurrent engineering and co-design approaches to advanced engineering design of LED products. * One of the only books to cover LEDs from package design to manufacturing to testing * Focuses on the design of LED packaging and its applications such as road lights * Includes design methods and experiences necessary for LED engineers, especially optical and thermal design * Introduces novel LED packaging structures and manufacturing processes, such as ASLP * Covers reliability considerations, the most challenging problem for the LED industry * Provides measurement and testing standards, which are critical for LED development, for both LED and LED fixtures * Codes and demonstrations available from the book s Companion Website This book is ideal for practicing engineers working in design or packaging at LED companies and graduate students preparing for work in industry. This book also provides a helpful introduction for advanced undergraduates, graduates, researchers, lighting designers, and product managers interested in the fundamentals of LED design and production. Color version of selected figures can be found at www.wiley.com/go/liu/led
Visa hela texten

"The book will be useful as a resource for engineers in LED design or packaging, and as an introduction to the field for advanced students, researchers, lighting designers, and product managers." (Book News, 1 October 2011)

Sheng Liu is a ChangJiang Professor of Mechanical Engineering at Huazhong University of Science and Technology. He holds a dual appointment at Wuhan National Laboratory for Optoelectronics, and has served as tenured faculty at Wayne State University. He has over 14 years experience in LED/MEMS/IC packaging and extensive experience in consulting with many leading multi-national and Chinese companies. Liu was awarded the White House/NSF Presidential Faculty Fellowship in 1995, ASME Young Engineer Award in 1996, and China NSFC Overseas Young Scientist in 1999. He has been an associate editor for IEEE Trans. On Electronic Packaging Manufacturing since 1999 and an associate editor of Journal of Frontiers of Optoelectronics in China since 2007. He is currently one of the 11 National Committee Members in LED under Ministry of Science and Technology. He obtained a Ph.D. from Stanford in 1992, and got MS and BS in flight vehicle design, Nanjing University of Aeronautics and Astronautics, and he had three years industrial experience in China and USA. He has filed more than 70 patents in China and the USA, and has published more than 300 technical articles. Xiaobing Luo is a professor at Huazhong University of Science and Technology, Wuhan, China, with appointments at the School of Energy and Power Engineering and Wuhan National Lab for Optoelectronics. He received his Ph.D. in 2002 from Tsinghua University, China. He has also worked in Samsung Electronics in Korea as a Senior Engineer. His main research interests are LED, heat and mass transfer, microfluidics, MEMS, and sensors and actuators. He has published more than 60 papers and has applied for 40 patents in the USA, Korea, Japan, Europe and China.