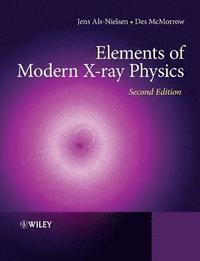 av Jens Als-Nielsen, Des McMorrow
Häftad Engelska, 2011-03-25
599
Köp
Spara som favorit
Skickas inom 7-10 vardagar.
Fri frakt inom Sverige för privatpersoner.
Finns även som
Visa alla 3 format & utgåvor
Eagerly awaited, this second edition of a best-selling text comprehensively describes from a modern perspective the basics of x-ray physics as well as the completely new opportunities offered by synchrotron radiation. Written by internationally acclaimed authors, the style of the book is to develop the basic physical principles without obscuring them with excessive mathematics. The second edition differs substantially from the first edition, with over 30% new material, including: * A new chapter on non-crystalline diffraction - designed to appeal to the large community who study the structure of liquids, glasses, and most importantly polymers and bio-molecules * A new chapter on x-ray imaging - developed in close cooperation with many of the leading experts in the field * Two new chapters covering non-crystalline diffraction and imaging * Many important changes to various sections in the book have been made with a view to improving the exposition * Four-colour representation throughout the text to clarify key concepts * Extensive problems after each chapter There is also supplementary book material for this title available online (http://booksupport.wiley.com). Praise for the previous edition: The publication of Jens Als-Nielsen and Des McMorrow s Elements of Modern X-ray Physics is a defining moment in the field of synchrotron radiation a welcome addition to the bookshelves of synchrotron radiation professionals and students alike...The text is now my personal choice for teaching x-ray physics Physics Today, 2002
Visa hela texten

Professor Emeritus Jens Als-Nielsen of the Niels Bohr Institute, University of Copenhagen, has been a pioneer in the field of neutron and x-ray scattering contributing to setting high standards for large international synchrotron centres. Today Jens Als-Nielsen's research is still - even after his official retirement - concentrated around x-ray radiation's potential in biological and medical research.? He was educated as a civil engineer in the field of electrophysics and from 1961-1995 was employed at the Riso National Laboratory, as section leader for the Solid-State Physics Section and later as division leader for the Physics Division. He has spent time at the European Synchrotron Radiation Facility, ESRF, Grenoble. From 1995 until his retirement in 2007 he was professor in experimental solid-state physics at the Niels Bohr Institute, University of Copenhagen. In 1985 he received the European Physical Society's Hewlett-Packard prize in solid-state physics and in 2009 the Velux Fonden's Honour Award for his research in the field of neutron and X-ray scattering. Professor Desmond McMorrow is Professor of Physics at University College London. He received his B.Sc from Sheffield University in 1983and his PhD in 1987 from the University of Manchester. After spending time in research at Edinburgh and Oxford he then worked with at the Riso National Laboratory and collaborated with Professor Als-Nieslen between 1998 and 2003. In 2004 he took up his position at UCL and received from 2004 - 2009 the Royal Society Wolfson Merit Award. His research is focussed on understanding how electrons organise themselves in solids to produce the wonderfully diverse range of phenomena encountered in modern condensed matter physics. His research is based mainly on using x-rays and neutrons to probe the structural and magnetic correlations that dominate the low-energy behaviour of these and other interesting classes of solids.