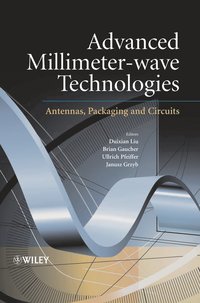 Dr Duixian Liu, Yorktown Hights, US is a researcher at IBM at Thomas J. Watson Research Center since April 1996. His research interests are antenna design, electromagnetic modeling, digital signal processing, and communications technology. He received the IBM's outstanding technical achievement awards in 2001 and 2002, and the IBM's highest technical award, in 2003, for contributions to the integrated antenna subsystems for laptop computers. Dr Ullrich Pfeiffer, Siegen, Germany is the head of the THz imaging group at the Institute of High-Frequency and Quantum Electronics at the University of Siegen, Germany. From 2001 to 2006 he was with the IBM T.J. Watson Research Center where his research involved RF circuit design, power amplifier design at 60 GHz and 77 GHz, high-frequency modeling and packaging for millimeter-wave communication systems. He is a member of the German Physical Society (DPG), and was the recipient of the 2004 and 2006 Lewis Winner Award for Outstanding Paper at the IEEE International Solid-State Circuit Conference. He received the European Young Investigator Award in 2006. Dr Brian Gaucher, Yorktown Hights, US is a research staff member at the IBM T.J. Watson Research Center where he manages a communication system design and characterization group. His present research interests include 60 GHz Gbps wireless communication design and biomedical applications of wireless technology. His group has helped more than five products come to market. He is an IBM master inventor and holds two outstanding technical achievement awards and one corporate award. Dr Janusz Grzyb, Pfaeffikon, Switzerland works at Huber + Suhner AG, Switzerland since 2006 as a senior R&D microwave engineer responsible for the development of a series of 60 GHz products. Before then, he worked at IBM T. J. Watson Research Center, NY. His primary responsibilities there were antenna and package design for 60-GHz wireless systems