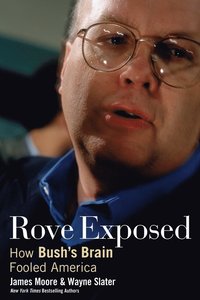 av James Moore, Wayne Slater
Häftad Engelska, 2005-10-01
129
Köp
Spara som favorit
Skickas inom 10-15 vardagar.
Fri frakt inom Sverige över 159 kr för privatpersoner.
With Bush as President, many suspect that the most powerful individual in the US is Karl Rove. Although Rove is officially listed as White House Senior Advisor, responsible for managing the Office of Political Affairs, the Office of Public Liaison, and the Office of Strategic Initiatives at the White House, he is, in fact, Busha s chief political strategist and his "political brain." Rovea s hand is seen in virtually every presidential decision ---- whether it involves steel import tariffs, extending the war on terrorism, the tax cut, the Middle East crisis or the environment. James Moore and Wayne Slater, the veteran journalists who wrote Bush's Brain, have written a new, updated version of their original book, ROVE EXPOSED: How Bush's Brain Fooled America. This engaging book offers readers a condensed version of Bush's Brain, plus new material highlighting Karl Rove's political maneuverings since the last presidential election.
Visa hela texten

Now we know: Karl Rove "is the co--president of the United States." (And you thought it was Dick Cheney.) "Karl Rove thinks it, and George W. Bush does it," write James Moore and Wayne Slater in Rove Exposed: How Busha s Brain Fooled America, an update of their bestselling Busha s Brain. In the latest attempt to understand the political mastermind who gives liberals the vapors, Moore (a TV news correspondent) and Slater (Austin, Tex., bureau chief for the Dallas Morning News) go through a laundry list of Rovea s alleged wrongdoing: that while running a Texas gubernatorial campaign, he may have planted a bug in his own office to cast suspicion on the opposing candidate; that he had a pet FBI agent open investigations of top Democratic officials in Texas at key moments in elections; that he held "dirty trick seminars" on campaign espionage for fellow College Republicans; that he told Robert Novak that Joseph Wilsona s wife, Valerie Plame, worked for the CIA. (Oh wait, that was Official A.) Rove, they conclude, is one bad dude: "If Karl Rove were not sitting in his office in the White House, there might have been no war in Iraq; there would be underprivileged children still attending Head Start programs ... there would be low income families getting health care ... there would be competitive bidding on contracts to rebuild Iraq instead of delivery of deals to Halliburton ... there would have been no California recall ... there would be a complete and honest report from the 9/11 Commission ... there would be real funding for Homeland Securitya s First Responders [and] there would even be more people with jobs." And every night, the Tooth Fairy would fill your pillow with gold doubloons. --Rachel Hartigan Shea (The Washington Posta s "Book World " section, November 6, 2005)

James C. Moore is the co--author of the New York Times bestseller, Bush's Brain: How Karl Rove Made George W. Bush Presidential, and Bush's War for Reelection: Iraq, the White House, and the People. A documentary film about his first book, "Bush's Brain," was made and appeared in theatres in major U.S. cities. He is an Emmy award--winning former television news correspondent who has traveled on every presidential campaign since 1976 and was a full--time correspondent on the Bush campaign. Moore's numerous professional honors include the Edward R. Murrow Award from the Radio and Television News Directors' Association and the Individual Broadcast Achievement Award from the Texas Headliners' Foundation. He has appeared on The Today Show, NBC Nightly News, CBS Evening News, CNN's American Morning, Hardball with Chris Matthews, and numerous other television programs. Wayne Slater is Senior Political Writer for The Dallas Morning News. He was appointed after serving 15 years as Austin bureau chief. He has appeared on numerous network television shows and is co--author of the bestseller, Bush's Brain. Slater traveled for 16 months covering the presidential campaign of George W. Bush. He has covered every Republican and Democratic national convention since 1988. He has appeared on NBC's Meet the Press, CNN's Crossfire and Inside Politics, ABC's Nightline and Good Morning America, C--Span, National Public Radio and Fox News' The Beltway Boys and The O'Reilly Factor.