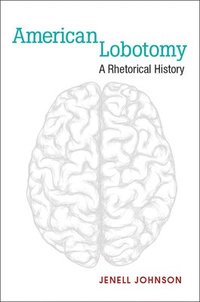 av Jenell Johnson
Häftad Engelska, 2016-04-19
249
Köp
Spara som favorit
Finns även som
Visa alla 1 format & utgåvor
American Lobotomy studies a wide variety of representations of lobotomy to offer a rhetorical history of one of the most infamous procedures in the history of medicine. The development of lobotomy in 1935 was heralded as a "miracle cure" that would empty the nation's perennially blighted asylums. However, only twenty years later, lobotomists initially praised for their "therapeutic courage" were condemned for their barbarity, an image that has only soured in subsequent decades. Johnson employs previously abandoned texts like science fiction, horror film, political polemics, and conspiracy theory to show how lobotomy's entanglement with social and political narratives contributed to a powerful image of the operation that persists to this day. The book provocatively challenges the history of medicine, arguing that rhetorical history is crucial to understanding medical history. It offers a case study of how medicine accumulates meaning as it circulates in public culture and argues for the need to understand biomedicine as a culturally situated practice.
Visa hela texten

"While Johnson's rhetorical analysis focuses on lobotomies, she also shows how popular representations of medicine draw as much on circulating cultural ideas as on the specifics of operations and experiments. Rejecting the outdated `influence' model in which information flows just from science to the public, Johnson demonstrates how lay responses to lobotomies influenced the ways that neurologists presented their procedures...A highly original, conscientiously researched, engagingly written study."-Laura Otis, Emory University "Johnson expertly intertwines history and detailed biographical information from and about medical professionals and their patients, and contextualizes it all with media and cultural artifacts to synthesize a project that is both entertaining and understandable by readers with little to no prior knowledge of psychiatry, psychosurgery, or public perceptions of the two."- Somatosphere "What is a lobotomy? ... [Johnson] works from the basic assumption that lobotomy has no single definition. It has no substance, no essence. Historically speaking, it consists only in an incredibly long list of associations with other things such as sciences, brains, and communism... The principle may be simple, but it is also revolutionary... Johnson's ontology holds the potential to remap the field of rhetoric." - Quarterly Journal of Speech

Jenell Johnson is Assistant Professor of Rhetoric, Politics, and Culture at the University of Wisconsin-Madison, USA.