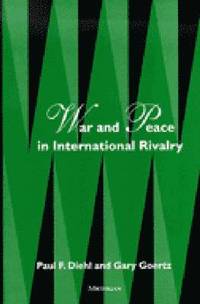 War and Peace in International Rivalry

av Paul Diehl, Gary Goertz
Häftad Engelska, 2001-10-01
339
Köp
Spara som favorit
Skickas inom 10-15 vardagar.
Fri frakt inom Sverige för privatpersoner.
This book provides the first detailed analysis of international rivalries, the long-standing and often violent confrontations between the same pairs of states. The book addresses conceptual components of rivalries and explores the origins, dynamics, and termination of the most dangerous form of rivalry--enduring rivalry--since 1816. Paul Diehl and Gary Goertz identify 1166 rivalries since 1816. They label sixty-three of those as enduring rivalries. These include the competitions between the United States and Soviet Union, India and Pakistan, and Israel and her Arab neighbors. The authors explain how rivalries form, evolve, and end. The first part of the book deals with how to conceptualize and measure rivalries and presents empirical patterns among rivalries in the period 1816-1992. The concepts derived from the study of rivalries are then used to reexamine two central pieces of international relations research, namely deterrence and ""democratic peace"" studies. The second half of the book builds an explanation of enduring rivalries based on a theory adapted from evolutionary biology, ""punctuated equilibrium."" The study of international rivalries has become one of the centerpieces of behavioral research on international conflict. This book, by two of the scholars who pioneered such studies, is the first comprehensive treatment of the subject. It will become the standard reference for all future studies of rivalries. Paul F. Diehl is Professor of Political Science and University Distinguished Teacher/Scholar, University of Illinois. He is the coeditor of Reconstructing Realpolitik and coauthor of Measuring the Correlates of War . Gary Goertz is Assistant Professor of Political Science, University of Arizona, and is the coauthor with Paul Diehl of Territorial Change and International Conflict .
Visa hela texten