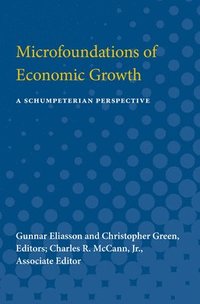 av Gunnar Eliasson, Christopher Gre, Charles McCann
Häftad Engelska, 1998-01-01
429
Köp
Spara som favorit
In exploring the microfoundations of economic growth, the contributors to Microfoundations of Economic Growth focus on three subjects that were of profound interest to the great Austrian and Harvard economist, Joseph A. Schumpeter: innovation, technological change, and economic growth. Here economic growth is approached from the vantage point of individual firms and industries. Most analysis of innovation takes place at the firm or industry level, while discussion of economic growth takes place at an economy-wide level. The first part of the volume examines institutions, markets, and entrepreneurs, without which analysis of the firm makes little or no sense. The second part focuses on the firm as innovator, placing heavy emphasis on the role of knowledge formation. The subjects of innovation and knowledge formation are approached from three perspectives: theoretical; industry (case) studies; and empirical (cross section and panel data) analysis. In the third part of the book the action moves from the firm to the ""macro"" or economy-wide level. The volume's unique feature is in combining a look at institutions and the innovative behavior of firms with an intuitively dynamic, macroeconomic analysis, all from a Schumpeterian perspective. The contributors argue that the study of microinstitutions, such as firms and the evolving nature of markets, is necessary for understanding macro-oriented phenomena such as economic growth. It is in this sense, then, that the book is concerned with microfoundations. Sixth in a series of volumes to spring from the biennial meeting of the International Schumpeter Society, this collection draws together the main themes of the sixth meeting held in Stockholm, Sweden, in June 1996. The society, founded in 1986, is a group of economists who work to promote the scientific study of the problems of economic development and innovation along the lines suggested by Joseph Alois Schumpeter.
Visa hela texten