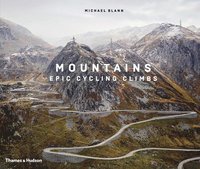 av Michael Blann
Inbunden Engelska, 2020-03-26
479
Köp
Spara som favorit
Skickas inom 7-10 vardagar.
Gratis frakt inom Sverige över 159 kr för privatpersoner.
Finns även som
Visa alla 1 format & utgåvor
The mountains of Europe have many different meanings to many different people. For the locals they are a way of life; for visitors they represent breathtaking beauty, active holidays and peaceful moments. For cyclists, however, the dramatic landscapes mean something quite different: suffering, pain, agony - and glory. For over a century the mountains have provided the setting for the greatest cycling contests, where human determination and willpower can triumph over nature and opponents. In recent years, as cycling's popularity has changed our cities, made us more active and taken us down less-travelled roads, the mountains of Europe have become the primary destination for everyday riders who want to challenge themselves, experience the storied roads and escape their everyday lives. This publication is aimed at all who wish to be inspired by those challenges or celebrate those personal victories. With tributes and personal recollections from leading road cyclists, the photographs and words coalesce into a visual depiction that transcends any single perspective and will inspire awe and wonder in anyone who wishes to confront the power of the mountains.
Visa hela texten

'A tribute to nature's beauty and man's dogged determination' - i '[A] spectacular portrait of some of the most beautiful and challenging scenery in the world ... offer[s] cycling aficionados plenty of bucket list inspiration' - Elle Decoration

Professional photographer and keen amateur cyclist Michael Blann spent his formative years racing his bike and dreaming of riding in the Tour de France. Aged nineteen, he left England for Australia to ride in a well-respected amateur team, during which he competed in the nine-day Golden West Tour in Queensland. This experience left him with the realization that a pro contract was out of reach. Returning to the UK, he enrolled in art college and eventually moved into advertising. This book brings together Blann's two great passions - cycling and photography - and evolved from a desire to produce a definitive record of the immense, immovable landforms that have set the stage for the most intense, nail-biting dramas the cycling world has ever seen. Limited-edition prints are available at www.michaelblann.com. Andrew Diprose is Group Creative Director at WIRED magazine in London and a keen cyclist. He lectures regularly on art direction, photography and illustration. He is also the co-founder, publisher and art director of cycling independent title The Ride Journal. Susannah Osborne is a journalist and has written for numerous newspapers and magazines on the subjects of travel, fitness and adventure sport. She has cycled since her late teens, first as a means to get around her native North Devon, and later as an active member of the women's road and criterium racing scene in the UK. She worked and cycled with Michael Blann for several years before teaming up with him on this book, which appeals to her love of storytelling and her long-standing fascination with dramatic landscapes.