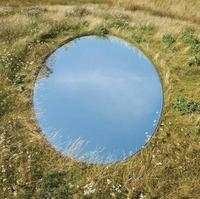 av Olafur Eliasson, Gunther Vogt
Inbunden Engelska, 2017-03-01
1339
Köp
Spara som favorit
Skickas inom 7-10 vardagar.
Fri frakt inom Sverige för privatpersoner.
One of the most wide-ranging and ambitious creative minds of his generation, Icelandic-Danish artist Olafur Eliasson has produced a dizzying spectrum of work around the world. Best known for his large-scale public works in a wide range of settings, from museums to gardens, his constant inventiveness and publicly oriented projects across the globe have entranced huge numbers of people. Focusing on a single artwork situated across a large site in his native country, the project's title refers to the glaciers that formed the landscape around sites in Denmark, as can still be seen in the country's topography and geology. Five mirrors, ranging from a perfect circle to elongated ellipses, reflect the changing sky above and the contemplator's own gaze as if in the surfaces of glacial pools. This book offers a unique and highly detailed insight, captured over the course of four seasons, of a singular landscape. Working with geologists, landscape architects and other specialists, Eliasson has created a unique space seen by few. This publication documents and enhances the work itself through photographs, essays and collaborators who render the poetic power of the project in images and words. Exquisitely produced and packaged in a limited quantity, this very special volume is a gift to collectors, bibliophiles and all those seeking new perspectives on one of the world's leading artists.
Visa hela texten

Attractively designed, thoughtful, and engaging... Located in a stunningly beautiful region with a topography that was carved by glaciers, [this] project incorporates existing grassland and diverse native plant species. Eliasson's contribution was five large circular and elliptical mirrors placed in the ground that reflect the sky and clouds and the surrounding plant life. Wonderful color photography shows the area over four seasons. For those interested in contemporary art, landscape architecture, and natural history.

Olafur Eliasson is an artist known for sculptures and large-scale installations which utilize natural elements, including light, water, fire and wood, often combined to re-create the outdoors inside. Born in 1967 he grew up in Iceland and Denmark. He studied, from 1989 to 1995, at the Royal Danish Academy of Fine Arts in Copenhagen, Denmark. His work is represented in public and private collections including the Solomon R Guggenheim Museum, New York, The Museum of Contemporary Art, Los Angeles, the Deste Foundation, Athens and the Tate, London. He represented Denmark in the 2003 Venice Biennale. He lives and works in Berlin. Landscape architect Gunther Vogt develops projects with some 40 employees in his offices in Zurich, London and Berlin.