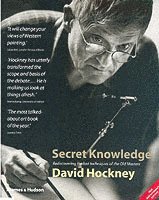 Rediscovering the lost techniques of the Old Masters

'The most talked-about art book of the year' - Sunday Times 'It will change our views of Western painting' - London Review of Books 'Hockney has utterly transformed the scope and basis of the debate... He is making us look at things afresh' - Martin Kemp, University of Oxford 'Hockney is a superb communicator, his prose as lithe and vivid as his own pencil line' - Guardian 'Sparkling, brilliantly analysed treatise on the use of optics in art and one of the most important books on painting published in the last 100 years' - State magazine

David Hockney is considered one of the most influential British artists of the 20th century. He has produced work in almost every medium - painting, drawing, stage design, photography and printmaking - and has stretched the boundaries of all of them. Born in Bradford, England, in 1937, Hockney attended art school in London before moving to Los Angeles in the 1960s. There, he painted his famous swimming pool paintings. In a 2011 poll of more than 1,000 British artists, Hockney was voted the most influential British artist of all time. He continues to create and exhibit art.