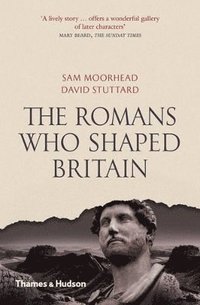 The Romans Who Shaped Britain

av Sam Moorhead, David Stuttard
Häftad Engelska, 2016-07-28
139
Köp
Spara som favorit
Finns även som
Visa alla 1 format & utgåvor
Roman Britain was created not by impersonal historical forces, but by men and women, each driven by ambition, aspiration and passion. The Romans Who Shaped Britain explores the narrative of Britannia through the lives of its emperors, commanders, governors, officials and rebels. This rich cast of characters includes some, such as Caesar, Agricola and Boudica, who may be familiar; and others, such as Carausius, Magnentius or Valentinus, who deserve to be more so. Their lives and actions are set against the backdrop of an evolving landscape, in which Iron Age shrines were being replaced by marble temples, industrial-scale factories and granaries were springing up across the countryside and a triumphal arch towered into the Kent sky to mark Rome's domination. Fast-moving, vivid and compelling, The Romans Who Shaped Britain , by setting out the story as a single narrative, above all reminds us of the truly epic nature of the history of Britannia.
Visa hela texten

'A lively story ... offers a wonderful gallery of later characters' - Mary Beard, Sunday Times 'An engaging, thought-provoking and often entertaining read ... very compelling ... a must for those who are bored by (or feel they know everything about our Roman heritage' - BBC History Magazine

Sam Moorhead, voted `Archaeologist of the Year 2011' by readers of Current Archaeology, is the National Finds Adviser for Iron Age and Roman Coins in the Department of Portable Antiquities and Treasure at the British Museum. David Stuttard is the founder of theatre company `Actors of Dionysus', and is the author of several books on the Classical world, including Greek Mythology and The Romans in Britain, both published by Thames & Hudson.