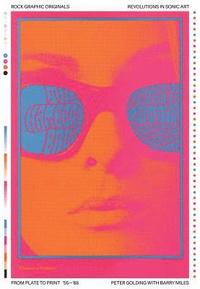 Revolutions in Sonic Art from Plate to Print '55-'88

av Peter Golding, Barry Miles
Häftad Engelska, 2018-10-25
389
Köp
Spara som favorit
As part of the '60s and '70s fashion movement, Peter Golding's famous ACE boutique in London's Chelsea brought him into regular contact with the biggest names in rock 'n' roll, and he went on to create one of the most comprehensive collections of rock 'n' roll graphics in existence. Showcasing the cream of this collection, Rock Graphic Originals is packed with vibrant poster art, logos, stage set designs and promotional ephemera created for artists such as the Grateful Dead, Jimi Hendrix, Bob Dylan, Pink Floyd, The Doors, Bruce Springsteen, Eric Clapton, Kiss, The Who and Alice Cooper. Organized chronologically into three sections, the book presents the evolution of highly wrought psychedelic poster art from its beginnings in the Beat era to its culmination in the vast stage sets of 1980s stadium rock. Original drawings, studies, paintings, finished artwork and separated plates are shown side by side, revealing the complete process involved in creating each printed poster and logo, and giving extraordinary insight into the creative minds of design giants such as Rick Griffin, Stanley Mouse and Alton Kelley. Barry Miles's concise introduction places the key protagonists and their work within their cultural and political context, while reflections from the artists themselves lend unique perspectives on their influences and methods.
Visa hela texten

A visually compelling collection that encapsulates the most impactful images that revolutionized a memorable period of music.

Peter Golding, musician and creator of the world's first `designer jean,' began collecting rock 'n' roll art in 1967, naming his collection `Inspirational Times.' As part of the sixties and seventies fashion movement, Peter Golding's famous ACE boutique in London's Chelsea brought him into regular contact with the biggest names in rock 'n' roll, and he went on to create one of the most comprehensive collections of rock 'n' roll graphics. He curated the first exhibition for `Inspirational Times' in London in 2003, was a major lender to the Tate Liverpool exhibition `Summer of Love' in 2005, and more recently contributed to the V&A's 2016-17 exhibition `You Say You Want a Revolution.' Barry Miles is the bestselling author of numerous biographies and countercultural histories. He was a founding contributor to International Times, a regular contributor to NME from 1975 to 1978, and editor of Time Out from 1978 to 1979.