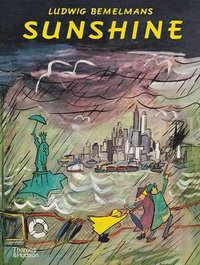 A Story about the City of New York

av Ludwig Bemelmans
Inbunden Engelska, 2020-08-06
139
Köp
Spara som favorit
Kan tyvärr inte längre levereras innan julafton.
First published in 1950, this enchanting picture book by the creator of Madeline tells the story of a music teacher whose greedy landlord is foiled in his efforts to evict her on Christmas Eve. In so doing, as the original cover copy states, it presents: 'a unique guide to New York City, showing its landmarks as they could only be seen through the eyes of Ludwig Bemelmans... Sunshine is pure Bemelmans of the most irresistible variety. The story, which concerns a children's music school - and umbrellas! - has the gentle touch of Madeline, as well as some thoroughly ridiculous situations. At the same time, adults all too familiar with the housing shortage will join the children in applauding when the gentle little music school teacher outwits a landlord who "doesn't permit cats or doggies or people who have noisy hobbies". And everyone will rejoice in the happy ending to this delightful story.'
Visa hela texten

Ludwig Bemelmans (1898-1962) moved from Italy to the United States in 1914, and became an illustrator for The New Yorker, Vogue and other magazines. His book Madeline was published in 1939, and its sequel, Madeline's Rescue, followed thirteen year later, winning the Caldecott Medal. He went on to publish a wide variety of books for both children and adults, including four more Madeline adventures. His life and work are the subject of Ludwig Bemelmans (Thames & Hudson), the first title in The Illustrators series, co-authored by Quentin Blake and Laurie Britton Newell. Barbara Bemelmans is the daughter of Ludwig Bemelmans and the manager of his estate.