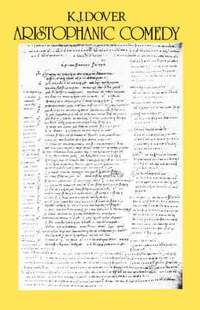 av Sir Kenneth J Dover
Häftad Engelska, 1972-03-01
289
Köp
Spara som favorit
Skickas inom 7-10 vardagar.
Fri frakt inom Sverige för privatpersoner.
Professor Dover's newest book is designed for those who are interested in the history of comedy as an art form but who are not necessarily familiar with the Greek language. The eleven surviving plays of Aristophanes are treated as representative of a genre. "Old Attic Comedy", which was artistically and intellectually homogeneous and gave expression to the spirit of Athenian society in the late fifth and early fourth centuries B.C. Aristophanes is regarded primarily not as a reformer or propagandist but as a dramatist who sought, in competition with his rivals, to win the esteem both of the general public and of the cultivated and critical minority. He succeeded in this effort by making people laugh, and the book pays more attention than has generally been paid to the technical means, whether of language or of situation, on which Aristophanes' humor depends. Particular emphasis is laid on his indifference - positively assisted by the physical limitations of the Greek theatre and the conditions of the Athenian dramatic festivals - to the maintenance of continuous 'dramatic illusion' or to the provision of a dramatic event with the antecedents and consequences which might logically be expected. More importance is attached to Aristophanes' adoption of popular attitudes and beliefs, to his creation of uninhibited characters with which the spectators could identify themselves, and to his acceptance of the comic poet's traditional role as a mordant but jocular critic of morals, than to any identifiable and consistent elements in his political standpoint.
Visa hela texten