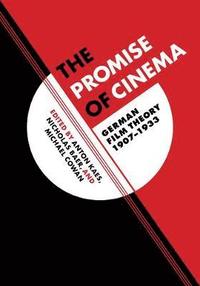 The Promise of Cinema

av Anton Kaes, Nicholas Baer, Michael Cowan
Häftad Engelska, 2016-04-15
659
Köp
Spara som favorit
Skickas inom 10-15 vardagar.
Fri frakt inom Sverige för privatpersoner.
Beställ senast idag kl 17:30 för leverans innan jul!
Finns även som
Visa alla 2 format & utgåvor
Rich in implications for our present era of media change, the Promise of Cinema offers a compelling new vision of film theory. The volume conceives of "theory" not as a fixed body of canonical texts, but as a dynamic set of reflections on the very idea of cinema and the possibilities once associated with it. Unearthing more than 275 early-twentieth-century German texts, this ground-breaking documentation leads readers into a world that was striving to assimilate modernity's most powerful new medium. We encounter lesser-known essays by Bela Balazs, Walter Benjamin, and Siegfried Kracauer alongside interventions from the realms of aesthetics, education, industry, politics, science, and technology. The book also features programmatic writings from the Weimar avant-garde and from directors such as Fritz Lang and F.W. Murnau. Nearly all documents appear in English for the first time; each is meticulously introduced and annotated. The most comprehensive collection of German writings on film published to date, The Promise of Cinema is an essential resource for students and scholars of film and media, critical theory, and European culture and history.
Visa hela texten

"Even the well-informed film scholar and the resourceful cinephile are likely to discover new material and striking juxtapositions. The texts assembled here reward repeated reading." * The Times Literary Supplement * "A trailblazing volume. The Promise of Cinema is already an indispensable resource for scholars and students of early German film cultures. There is no doubt that it will continue to be a central feature in scholarship on early German film cultures in the future." * Seminar: A Journal of Germanic Studies * "The Promise of Cinema effectively returns the contemporary reader to this time of limitless possibilities for this new and untested medium. And with that, the reader finds the surprising, delicious frosting on the cupcake of this amazing collection: the editors have sought, through their selection, placement, and contextualization of these various, sometimes disparate entries to build a bridge from the discrete realm of film theory to the ever-expanding arena of media studies. In so doing, the editors have given The Promise of Cinema an expansive life as a firstrate media studies resource." * German Studies Review *

Anton Kaes is Professor of German and Film & Media at the University of California, Berkeley. He has written and edited numerous books, including Shell Shock Cinema and The Weimar Republic Sourcebook, and is coeditor of the Weimar and Now series. Nicholas Baer is Visiting Assistant Professor of Cinema Studies and Philosophy at Purchase College, State University of New York. He has published many essays on German cinema, film theory, and the philosophy of history. Michael Cowan is Reader in Film Studies at the University of St. Andrews. He is the author of numerous books and collections including, most recently, Walter Ruttmann and the Cinema of Multiplicity: Avant-garde - Advertising - Modernity.