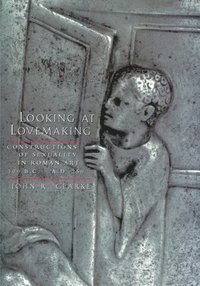 "This is an important book, ambitious in the goals it sets itself and elegantly realized. It succeeds in demonstrating its major thesis, that Roman sociosexual role allocations, values and attitudes do not correspond to familiar modern ones but demand to be understood in their own radical otherness, and that visual imagery can be an invaluable aid to such an understanding. The controversy which Looking at Lovemaking will no doubt provoke cannot fail to have a stimulating effect upon the rapidly developing appreciation of the complexity of Roman visual culture." - Sheldon Nodelman, Art in America "Clarke has produced a major book which contains much that is new, useful, and stimulating in terms of analysis as well as evidence. He melds contemporary theoretical insights and fresh primary data with a hard look at contexts - not only the original settings of the art works he discusses, but also the intellectual climates which have produced modern analyses. The result is a book which points in significant and unexpected directions." - Dominic Montserrat, The Classical Review "Carefully written and lavishly illustrated. Clarke is refreshingly honest and straightforward, presenting his assumptions and aims in clear, jargon-free prose. This book offers a well-constructed and convincing analysis of both familiar and unfamiliar material. [It's] meticulously researched and intelligently argued... an engaging and stimulating book. [It] is not only a model of the ways in which a creative and ambitious project may be carried out with precision and care, but also a fine addition both to the study of Roman art and to the exploration of ancient sexual practice." - Kristina Milnor, American Journal of Archaeology"

John R. Clarke is Annie Laurie Howard Regents Professor of Art History at the University of Texas at Austin. He is the author of The Houses of Roman Italy: Ritual, Space, and Decoration (California, 1991).