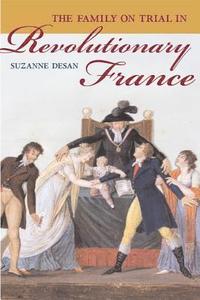 The Family on Trial in Revolutionary France

av Suzanne Desan
Häftad Engelska, 2006-06-01
325
Köp
Spara som favorit
Finns även som
Visa alla 1 format & utgåvor
In a groundbreaking book that challenges many assumptions about gender and politics in the French Revolution, Suzanne Desan offers an insightful analysis of the ways the Revolution radically redefined the family and its internal dynamics. She shows how revolutionary politics and laws brought about a social revolution within households and created space for thousands of French women and men to reimagine their most intimate relationships. Families negotiated new social practices, including divorce, the reduction of paternal authority, egalitarian inheritance for sons and daughters alike, and the granting of civil rights to illegitimate children. Contrary to arguments that claim the Revolution bound women within a domestic sphere, "The Family on Trial" maintains that the new civil laws and gender politics offered many women unexpected opportunities to gain power, property, or independence. The family became a political arena, a practical terrain for creating the Republic in day-to-day life. From 1789, citizens across France - sons and daughters, unhappily married spouses and illegitimate children, pamphleteers and moralists, deputies and judges - all disputed how the family should be reformed to remake the new France. They debated how revolutionary ideals and institutions should transform the emotional bonds, gender dynamics, legal customs, and economic arrangements that structured the family. They asked how to bring the principles of liberty, equality, and regeneration into the home. And as French citizens confronted each other in the home, in court, and in print, they gradually negotiated new domestic practices that balanced Old Regime customs with revolutionary innovations in law and culture. In a narrative that combines national-level analysis with a case study of family contestation in Normandy, Desan explores these struggles to bring politics into households and to envision and put into practice a new set of familial relationships.
Visa hela texten

"Desan's deeply researched book tracks the debates about marriage, divorce, parenthood and inheritance in Revolutionary France. Through absorbing, well-told tales of people caught up in a redefinition of identities, Desan brilliantly demonstrates that the "social revolution" of the 1790s largely took place in the realm of family relations. This book is a crucial intervention in the scholarship of the French Revolution." - Sarah Maza, author of The Myth of the French Bourgeoisie: An Essay on the Social Imaginary "In The Family on Trial in Revolutionary France, Suzanne Desan brings together evidence of the lively struggles among lawmakers, judges, and ordinary women and men to remake family relations during the French Revolution. Marriage, divorce, inheritance, unwed mothers and their children - the Revolution redefined them all. Desan restores the optimism of a revolution which, even while foundering in the Terror and conservative backlash, bequeathed to the 19th century alternative ways of imagining how families might live together in equality and love. A riveting read." - Natalie Zemon Davis, author of The Gift in Sixteenth Century France"

Suzanne Desan is Professor of History at the University of Wisconsin, Madison, and author of the prize-winning Reclaiming the Sacred: Lay Religion and Popular Politics in Revolutionary France (1990).

List of Illustrations Acknowledgments Introduction 1. Freedom of the Heart--Men and Women Critique Marriage 2. The Political Power of Love--Marriage, Regeneration, and Citizenship 3. Broken Bonds--The Revolutionary Practice of Divorce 4. "War between Brothers and Sisters"--Egalitarian Inheritance and Gender Politics 5. Natural Children, Abandoned Mothers, and Emancipated Fathers--Illegitimacy and Unwed Motherhood 6. What Makes a Father?--Illegitimacy and Paternity from the Year II to the Civil Code 7. Reconstituting the Social after the Terror--The Backlash against Family Innovations 8. The Genesis of the Civil Code Conclusion Appendix I: Communes in the Calvados Studied for Cases of Divorce Appendix II: Chronology of Revolutionary Family Laws Note on Archival Sources Abbreviations Notes Index