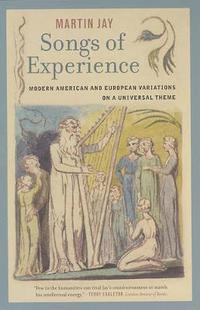 Modern American and European Variations on a Universal Theme

av Martin Jay
Häftad Engelska, 2005-01-01
409
Köp
Spara som favorit
Skickas inom 7-10 vardagar.
Fri frakt inom Sverige för privatpersoner.
Finns även som
Visa alla 1 format & utgåvor
Few words in both everyday parlance and theoretical discourse have been as rhapsodically defended or as fervently resisted as 'experience'. Yet, to date, there have been no comprehensive studies of how the concept of experience has evolved over time and why so many thinkers in so many different traditions have been compelled to understand it. "Songs of Experience" is a remarkable history of Western ideas about the nature of human experience written by one of our best-known intellectual historians. With its sweeping historical reach and lucid comparative analysis - qualities that have made Martin Jay's previous books so distinctive and so successful - "Songs of Experience" explores Western discourse from the sixteenth century to the present, asking why the concept of experience has been such a magnet for controversy. Resisting any single overarching narrative, Jay discovers themes and patterns that transcend individuals and particular schools of thought and illuminate the entire spectrum of intellectual history. As he explores the manifold contexts for understanding experience - epistemological, religious, aesthetic, political, and historical - Jay engages an exceptionally broad range of European and American traditions and thinkers from the American pragmatists and British Marxist humanists to the Frankfurt School and the French poststructuralists, and he delves into the thought of individual philosophers as well, including Montaigne, Bacon, Locke, Hume and Kant, Oakeshott, Collingwood, and Ankersmit. Provocative, engaging, erudite, this key work will be an essential source for anyone who joins the ongoing debate about the material, linguistic, cultural, and theoretical meaning of 'experience' in modern cultures.
Visa hela texten

"Few in the humanities can rival Jay's omnivorousness or match his intellectual energy." - Terry Eagleton, London Review of Books "Songs of Experience is at once modest and extraordinarily ambitious. The erudition on display in this sweeping account of a central concept in Western philosophy over several hundred years is a wonder; the writing is clear, and the scholarship breathtaking. But it is modest in the sense that it does not announce its own point of view with any emphasis. Instead, the reader benefits from the author's openness to thinkers as unalike as Schleiermacher and Rorty, Oakeshott and Bataille. Jay makes sense of each thinker on his own terms - and that's because with his intellectual openness and his conceptual mediation, Jay indeed practices what he is so lightly preaching. An intellectual historian at the top of his game, he has shared his own experience of these ideas, texts, and writers. After reading this book, we can too." - Michael Roth, Bookforum "A magisterial study of one of the most elusive, contested, and pervasively important concepts of the Western philosophical tradition." - Richard Shusterman, author of Pragmatist Aesthetics"

Martin Jay is Sidney Hellman Ehrman Professor of History at the University of California, Berkeley. Among his books are Refractions of Violence (2003), The Dialectical Imagination: A History of the Frankfurt School and the Institute of Social Research, 1923 - 1950 (second edition, California, 1996), Downcast Eyes: The Denigration of Vision in Twentieth-Century French Thought (California, 1993), and Marxism and Totality: The Adventures of a Concept from Lukacs to Habermas (California, 1984).

Introduction 1. The Trial of "Experience": From the Greeks to Montaigne and Bacon 2. Experience and Epistemology: The Contest between Empiricism and Idealism 3. The Consolations of Religious Experience: Schleiermacher, James, Otto and Buber 4. Returning to the Body through Aesthetic Experience: From Kant to Dewey 5. Politics and Experience: Burke, Oakeshott and the English Marxists 6. History and Experience: Dilthey, Collingwood, Scott and Ankersmit 7. The Cult of Experience in American Pragmatism: James, Dewey and Rorty 8. Lamenting the Crisis of Experience: Benjamin and Adorno 9. The Poststructuralist Reconstitution of Experience: Bataille, Barthes and Foucault Conclusion