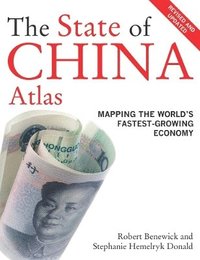 The State of China Atlas

Foreword by Tony Saich Introduction Part One CHINA IN THE WORLD 1 Trade China, in conjunction with Hong Kong, is the second-largest trading nation in the world. 2 Investment Foreign direct investment in China continues to grow, and China is developing its own overseas investments. 3 Military Power China's regular armed forces comprise 9 percent of the world's total. 4 International Relations China's international relations are influenced by a combination of ambition and nationalism. 5 Chinese Diaspora Chinese outward migration over the centuries has created some strong overseas communities. Part Two PEOPLE IN CHINA 6 Population Over 1.3 billion people, one-fifth of the world's population, live in China. 7 The Gender Gap There are more boys than girls in China. 8 Minority Nationalities Around 10 percent of people in China are from one of 55 officially recognized ethnic groups. 9 Rural-Urban Inequality China is one of the most unequal societies in the world. Part Three THE ECONOMY 10 Economic Development Between 1990 and 2007, China's economy grew by an average of 10 percent a year. 11 Entrepreneurs The entrepreneur is feted in popular self-help manuals and biographies. 12 Employment There are at least 8 million new entrants each year into China's labor market. 13 Agriculture Agriculture provides a declining share of China's GDP. 14 Industry China's industrial output is expanding, with goods produced both for export and in the hope of building domestic demand. 15 Services The share of GDP contributed by the services sector grew by 10 percent between 1997 and 2007. 16 Tourism The major focus of China's tourism industry is on domestic tourists. 17 Energy China's energy production has soared since 2002, in order to keep up with the demand of its growing economy. Part Four THE ENVIRONMENT 18 Urbanization China is undergoing the largest internal migration in the history of the world. 19 Transport The growth of motorized traffic in China's cities is indicative of the drive towards rapid modernization. 20 Air Pollution The conflict between environmental protection and economic growth is one of China's foremost dilemmas. 21 Water Resources China is facing a water crisis - both in terms of supply and of quality. Part Five GOVERNANCE AND RIGHTS 22 Who Runs China China is a one-party state, with supreme power exercised by the nine members of the Politburo. 23 Chinese Communist Party The CCP is the most powerful political party in the world. 24 The People's Liberation Army The PLA is controlled by the Party-State through two arms of the Central Military Commission, both of them chaired by Chairman Hu Jintao. 25 Rule of Law In the era of economic reform, China has moved towards enshrining the rule of law in the constitution and in practice. 26 State Versus Citizens China is a more open society than 30 years ago. Part Six LIVING IN CHINA 27 Households China's one-child policy is creating a population with a high proportion of elderly dependents. 28 Food China's national diet is changing, with urbanites eating an increasing amount of meat and dairy products. 29 Health Increased commercialization of China's healthcare system is putting certain treatments beyond the means of many households. 30 Education China has over 130 million children in primary and secondary education. 31 Media and Telecoms China's burgeoning media sector is a sign of its growing economy. 32 Religion Only five religions are allowed by the Chinese government. Part Seven DATES AND DATA Chronology 1949-1979 Chronology 1980-2010 Data Tables China in the World China: Population China: Economy China: Living and Lifestyle China: Natural Resources Commentaries and Sources Select Bibliography Index