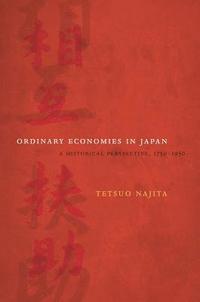 av Tetsuo Najita
Inbunden Engelska, 2009-09-25
749
Köp
Spara som favorit
Skickas inom 7-10 vardagar.
Fri frakt inom Sverige för privatpersoner.
Tetsuo Najita explores a powerful theme in the economic thought and practice of ordinary citizens in late Tokugawa and early modern Japan. He examines commoners' writings on the virtues of commerce, the reconstruction of villages, and groups offering credit and loans, particularly the traditional cooperative, the ko, which citizens created to save one another in times of famine and fiscal emergency without turning to their government. The alternative genealogy of early Japanese capitalism that emerges is based on cooperative action, whose motive for profit was combined with a concern for social well-being. Najita's discussion centers on the relationship of economics, ethics, and the epistemological premise that nature must serve as the first principle of all knowledge, and he illuminates comparative issues of poverty, capitalism, and modernity.
Visa hela texten

Tetsuo Najita is the Robert S. Ingersoll Distinguished Service Professor emeritus in the Departments of History and East Asian Languages and Civilizations at the University of Chicago. His many publications include Hara Kei in the Politics of Compromise, Japan: Intellectual Foundations of Modern Japanese Politics, and Visions of Virtue in Tokugawa Japan.