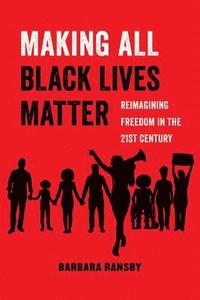 Reimagining Freedom in the Twenty-First Century

av Barbara Ransby
Häftad Engelska, 2018-09-07
199
Köp
Spara som favorit
Skickas inom 7-10 vardagar.
Fri frakt inom Sverige för privatpersoner.
Finns även som
Visa alla 2 format & utgåvor
This title is part of American Studies Now and available as an e-book first. Visit ucpress.edu/go/americanstudiesnow to learn more. In the wake of the murder of unarmed teenager Trayvon Martin in 2012 and the exoneration of his killer, three black women activists launched a hashtag and social media platform, Black Lives Matter, which would become the rubric for a larger movement. To many, especially those in the media, Black Lives Matter appeared to burst onto the national political landscape out of thin air. However, as Making All Black Lives Matter shows, the movement has roots in prison abolition, anti-police violence, black youth movements, and radical mobilizations across the country dating back for at least a decade. Barbara Ransby interviewed more than a dozen of the principal organizers and activists in the movement and provides a detailed review of its extensive coverage in mainstream and social media. Making All Black Lives Matter offers one of the first overviews of Black Lives Matter and explores the challenges and possible future for this growing and influential movement.
Visa hela texten

Barbara Ransby is a historian, author and longtime activist. She is author of the acclaimed biography, Ella Baker and the Black Freedom Movement. Barbara was one of the founders of African American Women in Defense of Ourselves in 1991 and the Black Radical Congress in 1998. She is Editor of the journal, Souls: A Critical Journal of Black Politics, Culture and Society, and Professor and Director of the Social Justice Initiative at the University of Illinois at Chicago

Introduction 1. Roots and Recalibrated Expectations: Prologue to a Movement 2. Justice for Trayvon: The Spark 3. The Ferguson Uprising and Its Reverberations 4. Black Rage and Blacks in Power: Baltimore and Electoral Politics 5. Themes, Dilemmas, and Challenges 6. Backlash and a Price 7. A View from the Local: Chicago's Fighting Spirit 8. Political Quilters and Maroon Spaces Conclusion Epilogue: A Personal Reflection Acknowledgments Notes Glossary Key Figures Selected Bibliography